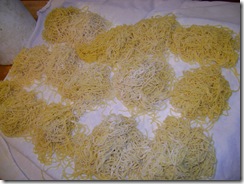 Don’t be disappointed… this is more of a state of mind than a recipe.  Okay, more of a technique, but that sounds all boring and pretentious.

First, have some leftover pumpkin.  You can buy it tinned, but at this time of year, pumpkins are cheap and plentiful (not as cheap as they will be come November 1st!).  Roasting them is easy, so don’t bother boiling (that’s what I used to do – cut up & boil – why???).  Cut the pumpkin in half, scoop out the seeds, place face-down on a pan (I use tinfoil because they get messy).  Roast at whatever temperature your oven is at (300-350) until you can poke through the skin & flesh with a skewer.  Done!

When cool (I just leave them in the oven overnight, where fruit flies can’t find them) purée in food processor. 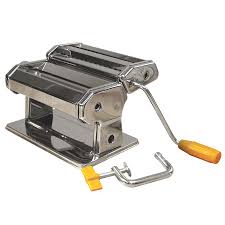 (while you’re waiting for them to cool, read this heartfelt entreaty about why you must buy a pasta maker)

Now for the noodles.  You won’t use the whole pumpkin for noodles, so maybe divide it in half, or into 1-cup portions, or something.  Start with a 1-cup portion of pumpkin to begin with.

NOTE:  It looks like there’s a lot of text here.  That’s just because I’m detail-oriented aka obsessed.  Here are the basic steps, first, to demystify the process:

See – easy?  Here are some of the details:

Pasta can be made with just about any liquid and flour – all-egg is the authentic italian way, with semolina flour for good measure.  All-purpose and plain water is at the other end of the spectrum, not very authentic, not deeply tasty, but it yields a decent white noodle.  So take your cup of puréed pumpkin, add some salt for flavour, and mix it with enough all-purpose OR semolina flour (a bit at a time so you don’t go over) that you get a VERY firm dough.  I do this in the food processor – it doesn’t turn into a soft ball of dough, like for bread, but stays looking like “crumbs” until I pull it out and knead it a bit on the table.  The firmer the dough, the better.  Too soft and it won’t go through the pasta machine and it’ll be sticking everywhere like a nightmare.

Leave the dough 20 minutes for it to become “chometz.”  This is how I explain it to my kids… at Pesach, we don’t wait 20 minutes, during the year, we must for any dough to become workable.  (the 20 minutes most recipes tell you to wait is rounded up from the 18 minutes that halacha says we must complete matzah in or the grain begins to swell, activating the gluten and strengthening the dough)

Now, start rolling!  I won’t describe that step, except to say that I hope you have a pasta maker.  I rolled these out to about a 5, I think.  Thinner than that is very difficult to manage.  Use plenty of flour, and do a bit at a time, keeping the rest covered in a bowl.  When it’s rolled out thin, dust with flour and run it through the cutting rollers – I used the thin cutters for these.

Catch the noodles as they come out and dust them with even MORE flour.  Dance them around in the flour until they’re thoroughly coated, then gather them into a “nest” and place on a clean, floured cotton towel (no terry cloth – it may get stuck to the pasta).  For faster drying, I elevate the towels on top of cooling racks (see above).

Repeat the rolling and cutting steps until noodles are complete.  They can be used immediately or dried overnight.  Use right away OR spread on cookie sheet to freeze.  Transfer to large airtight baggie when frozen.

Cooking time for fresh pasta is about 4 minutes… as long as it takes for the noodles to float to the top of well-boiling, salted water.

Just a warning note:  whatever flavouring you use in pasta/noodles does NOT impart a strong taste to the finished dish.  That can be disappointing or it can be nice.  You will not get a strong “hit” of pumpkin when you bite into these… it’ll be more of a subtle undertone.  It is definitely a lot of work for a final product not much different from what you can buy in a store.  But learning to make pasta is important for filled pastas like ravioli and tortellini that are almost impossible to find kosher.  Plus, the texture is slightly different; you control it, in part, based on how thin you roll the noodles and how long you cook them.  In any event, I rarely make unflavoured pasta because it’s so much easier to buy.

Now, for the kugel.  This part’s easy! 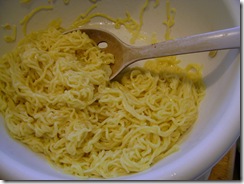 Grab some veg and process them into tiny bits (I used one carrot, 2 peppers and an onion): 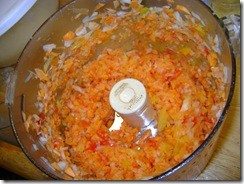 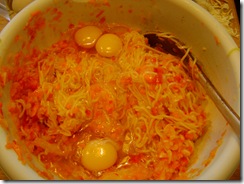 How much oil?  Enough to make it very slippery.  How many eggs?  One more than you think is necessary.  I have always been stingy with eggs in kugels, but in fact, they help keep the kugel moist and delicious.  Don’t skimp!  The mixture should like creamy, like pancake batter.  If you’re concerned about the seasoning, test by making a couple of “pancakes / latkes” on a heated skillet: 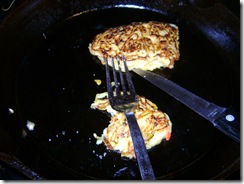 Mmm… at this point, my brain exploded, it tasted SO good.

Pour into pan(s) – keeping an even proportion of eggs, noodles, veg in each: 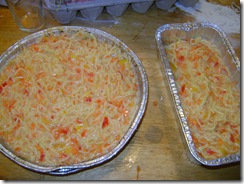 Bake until barely set in the middle!  (see the pumpkin seeds I baked alongside?) 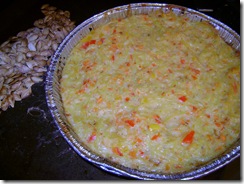 For a moist kugel, don’t overbake.  It should be SOLID in the middle, ie not jiggly, but not overly brown on top.  This looks underdone because my flash washed it out, but in fact it was decently browned and absolutely perfect inside.