Haiku from my mother

Okay, it’s NOT a Haiku.  But “short unintentionally-Japanese-style-minimalist email from my mother” is not exactly a catchy subject line.

To me, it’s a perfect haiku: 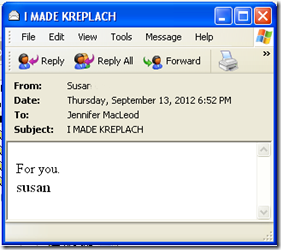 So much unsaid.  And yet, enough said.

I have never in my life actually called my mother Susan.  When we were kids, she read somewhere that mothers should train their kids to call for them by first name, presumably because if they’re lost in a crowd, every other kid is going to be calling out “Mommy!” in desperation, so you’ll pick out your own first name readily from the cacaphony.  (“So many lost children – which one is mine?!?”)

But I refused.  I think we all refused, and besides, I don’t think any of us were ever so lost that we had to resort to the last-ditch strategy of Uttering the Ineffable.

Since I became a mother myself, I have been quoting to her an article I saw that concluded that mothers bond with the unique sound of their own child’s voice within 24 hours after birth, and vice versa.  So assuming we’re properly bonded, first names never need to come into the relationship at all.

I think her email signature is automatic, but it’s always strange to see it on there.  Strange, but I’ll overlook it because… kreplach!

Don’t tell anybody, but you can cook pre-boiled (ie leftover from the soup) kreplach Asian-style, like little pot-stickers.  Fry one side in oil until slightly browned, flip, pour water into pan, boil away water, eat, enjoy.

For years I have been joking that I’d never heard the singular of kreplach, jokingly calling the individual ones “krepel.”  But it turns out that is the actual singular.  One krepel, two kreplach… a little Ziploc baggie of kreplach, handmade with love, waiting in my mother’s freezer.