“I did a great narration!”

And he really did.  For him, after we’ve read the parsha summary (usually, on Fridays, we just read the little ones in My First Parsha Reader), I have him draw his picture while Naomi’s telling me her narration.  Then, he tells me what’s in his picture, and I write the “caption.” 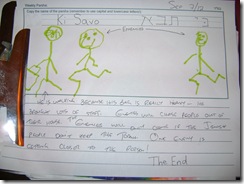 Here’s what it says:

“He (one of the guys) is walking because his bag is really heavy – he brought lots of stuff!  Enemies will chase people out of their house.  The enemies will only come if the Jewish people don’t keep the Torah.  One enemy is getting closer to the person!  The end.”  (he asked me to write that at the end)

Now, I’m not sure I love how simplistic this understanding is – but on the other hand, I suppose the essence of this week’s parsha is the idea of reward and punishment, and I really think he got that much.  He just happens to be a 4-year-old boy (4 for two more weeks) who thinks the punishment is way cooler than the reward.