Cranky Complaints-Lady gets in a Twist 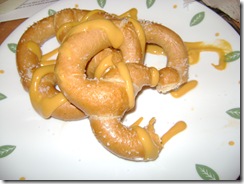 FYI:  My teenage children have already alerted me to the fact that complaints like this fall into the genre of “first-world problems.”  But still… if you buy something marketed as a delightful snack treat, don’t you expect it to be just a little bit good???

My husband sometimes buys your frozen pretzels here in Toronto (at Sobey's or perhaps Kosher City) as a treat because they're the only brand available, but I thought I would email to let you know how awful they are by the time they get to our plates here at home. 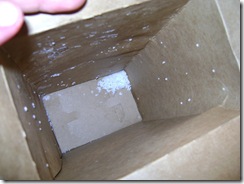 Although I'm sure they're fine when they leave your factory, by the time they arrive here, the box is obviously beaten-up looking, evidence that it has thawed and been re-frozen on its way to the store.  Mysteriously, the box I just opened is mysteriously full of salt (though the salt packet insert still seems intact), with salt stains on the inner walls, indicating high moisture levels during transit.  (The box says best by {spoilers – date removed}, if that information helps you track this particular shipment.) 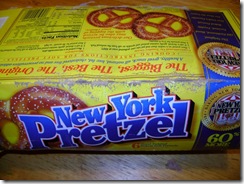 Clearly as a result of this mistreatment, the pretzels themselves are difficult to reheat because there are "tough" patches and some regions are so dry you could choke while eating them.  This is not a one-time occurrence, which is why I'm somewhat mystified that we keep trying them.  Smothered in mustard, they're not entirely terrible, but I wanted to let you know how angry I get every time I see the slogan on the box bragging that they are the "The Biggest, The Best and The Original!"  They may be big, and they may be original (I doubt it), but frankly, a reheated old leather belt would probably be better, given sufficient mustard.