Don’t forget to read this week’s Parsha Poem (Oops - another missing one!) and parsha overview.  Plus… copywork and parsha activities – something for every week of the year! 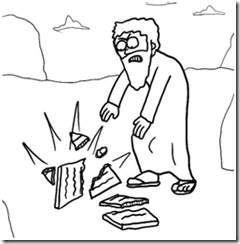 This parsha’s so humble, it really means “heel,”
For the mitzvos both lofty and low;
Just like our father whose name might conceal,
Though lesser, his greatness would grow.  Who was he?

Moshe’s been quite patient with all of the Jews
Kvetching to him with the words that they choose,
But now here at last, he asks, “What the heck?
Please, please, holy Jews, just lose the stiff __________!”

He came down so quickly from mountaintop’s thunder,
Witnessed the Jews and their golden-cow blunder;
Smashed up the tablets in anger and wrath;
But how was he punished, his sad aftermath?

Hashem is so powerful, that much is true,
And He always does what He’s asserted,
But when Moshe davens for one of his crew,
Half the decree is averted!  What was the decree?

STUMPED?? Here are some answers:
[ 1 ] Yaakov was named for his birth at Esav’s heel, though he’d become greater (Rashi, Bereishis 25:26).
[ 2 ] Neck (9:6).
[ 3 ] According to most views, Moshe wasn’t punished for this hasty decision.  The Talmud (Yevamos 62a) says Hashem wished him “Yiyasher kochacha,” (“way to go”), one of three times Moshe acted on his own and received divine approval afterwards. (more on this topic)
[ 4 ] Widow, convert, orphan; geir, yasom, almanah.  You pick!
[ 5 ] After the cheit ha’egel (golden calf), Hashem decided to kill Aharon’s four sons, but Moshe davened and only Nadav and Avihu died (Rashi 9:20).