(p.s. Love the owl-eater in the picture below???  Download a colouring page of him here - scroll down or search for Re’ay, or “colouring” (spelled the Canadian way)!)

Only seven more parshiyos in Sefer Devarim, Moshe’s speech during the last five weeks of his life.

Then, we’ll finish the entire Torah! Do you know when? (Simchas Torah) Do we stop reading it then? (No, we start all over again with the story of Bereishis!) Do you remember reading Bereishis last year? If not, that’s okay, because we read it over and over and over again! In Devarim, Moshe says things bnei Yisrael have heard before, because it’s a new generation, the children of those who left Mitzrayim. Plus, these are very important lessons.

Were you ever in a sports group that was divided up into two teams?

Before they go into eretz Yisrael, bnei Yisrael must split into two “teams,” except instead of sports, they’re going to stand on two mountains. In the middle, kohanim and levi’im will call out blessings (brachas) and curses (klalos). We’ll read about this in parshas Ki Savo, in a few weeks, but Moshe tells them now so they won’t be surprised when it happens.

Without bnei Yisrael, eretz Yisrael is in a pretty sad state.

Although it truly is a wonderful land, the people living there don’t know about Hashem. They are ovdei avoda zara – they have idols all over the place, mostly on mountains and other special places that felt important.

But Hashem is different! He doesn’t need grand important places!

Hashem can make even a small “bump” like Har Sinai important if He chooses. He can make a desert important by filling it with wonders; He can make a spot in the middle of the Yam Suf important just by splitting it before us. So He asks bnei Yisrael to destroy the idols and altars and build a home for Him instead – the bais HaMikdash. He will choose the place. It doesn’t have to be beautiful or special; it will become special once He lives there. They will serve Hashem mostly with korbanos. Moshe has already taught the kohanim about them, but now he tells all the men and big boys to participate three times a year by walking to Hashem’s special place in Yerushalayim: Pesach, Shavuos and Sukkos. Do you know the Hebrew word for FOOT? (רֶגֶל / regel) Those became known as שָׁלֹשׁ רְגָלִים / shalosh regalim, “three feet” days (in English, “pilgrimage” days). We still have those holidays, but we daven in many little shuls around the world.

Moshe warns bnei Yisrael not to do avoda zara! But why???

Why would people who have seen Hashem’s wonders turn around and daven to statues or mountains or trees? But it’s easy for anyone to see something beautiful or powerful and be amazed by it… instead of by Hashem, who made it.

After Moshe and Yehoshua, other leaders would come, nevi’im (prophets) who would teach Hashem’s messages. But every once in a while, a leader might come who LIED to them. How would they know? Moshe says that if the navi tells them to change the Torah, or do avoda zara, that person is a navi SHEKER – a lying navi – and they must kill that person right away. It might also happen that an entire city turns away from Hashem. This is called an “ir hanidachas” (עיר הנדחת), and they must burn it and destroy it completely. Many people believe this never actually happened – that good, honest nevi’im would come and help a city do teshuva when it went wrong. 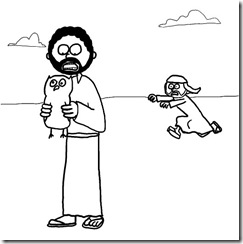 Did you ever know someone who went on a diet?

Many people love new diets: learning what they can and can’t eat, how much at different times. They hope the diet will make them healthier and happier. Hashem’s diet is the healthiest, happiest thing for our neshama! Here are some rules:

Remember that the kohanim and levi’im weren’t getting land in eretz Yisrael?

Without land, they couldn’t farm, and Moshe reminds bnei Yisrael to save part of their crops for the kohanim and levi’im in return for doing their important jobs. They must also look after geirim (people who choose to become Jewish), widows and orphans, because they don’t have as much help from their family.

Do you remember what Shemitta is?

Every seven years, bnei Yisrael couldn’t farm their land. Shemitta also meant forgiving debts – if somebody owed you money, they didn’t have to pay you anymore. Also, Jewish slaves could go free at the shemitta year.

But this was NOT the same kind of slavery as in Mitzrayim!

This slavery was actually not a bad life. The master fed and took care of slaves and treated them well. And sometimes, a slave refused to leave when shemitta came. At the door of the master’s house, the master would pierce his ear with a sharp tool to show that he was a permanent slave. Slavery was not unpleasant, but Hashem wants His people to be free, so the ear-mark was a way of making the person just a little bit ashamed of his choice to stay a slave.

No doubt about it; eretz Yisrael was going to be different from any other country… as we’ll see in next week’s parsha!