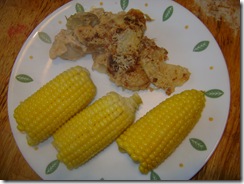 Around here, the one thing we all agree on, food-wise, is potatoes.  And it occurs to me, as I type this, that we have had some form of potato every night this week:  potato soup on Sunday (after Tisha b’Av), the same potato soup revisited as a curried carrot/fish stew on Monday, and mashed potatoes last night with our “girls’ night” STEAK binge (Ted & YM were off in Lakewood for a wedding).

But it’s too late, because tonight is scalloped-potatoes night, and I thought I’d share some tips for getting this quick-easy and yummy-for-all-ages supper to the table quicker.

(Of course, in your home, scalloped potatoes might not be supper.  As far as I’m concerned, it’s okay – I’m serving it with farmers’ market corn on the cob, and that, in my opinion, is a meal.  Ted prefers to have a protein on the side of one of my all-starch suppers – like salmon or beanie burgers (try these ones – just smoosh them for burgers instead of balls).  Chacun a son gout.)

Anyway – some tips I came up with off the top of my head as I was making these:

#1 – Microwave the potatoes first.  Not to death, please!  Just until they’re tender enough to cut.  That saves at least half an hour of the baking time.  Slice thinly, place in single layers in the pan.  (once fully cooked, they’re difficult to slice cleanly) 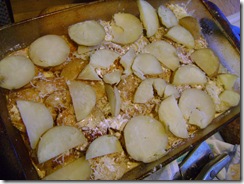 #2 – Spray each layer with cooking spray.  Not sure why I do that, but there it is.  Then, sprinkle flour gently on each layer of potatoes, and add salt, pepper and paprika.  If you like other herbs & spices, use them also or instead!

#3 – Season each layer gently with whatever you have on hand.  Here, I’m using a bit of onion soup mix, but onion powder is fine, or homemade chives, or garlic – just something from the allium family!

#4 – I use evaporated milk for extra richness without extra fat.  Plus, we always have tins of this on hand.  Some people don’t like evaporated milk (we don’t drink it straight – but did you know you could whip it to make a “light” dessert topping???), but if you use it in something like this, I think you pretty much can’t detect any unusual taste (but maybe I’m deluding myself).  Pour milk over each layer as it’s finished. 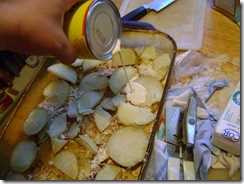 #5 – When the whole thing is layered, top it up with regular milk so the milk comes almost to the top of the uppermost potatoes layer. 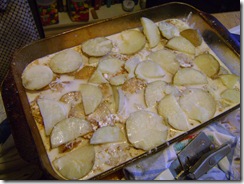 #4 – Top it nicely!  Here, I’m using mozzarella (there’s also a bit of mozzarella sprinkled in the next-to-last layer), mixed with panko (extra-crunchy Japanese bread crumbs, but regular ones will do) and also the last of some fried-onion salad sprinkle I picked up on impulse somewhere.  Those french-fried onion things might work, too.  Your choice of topping can make or break anything in a casserole dish!  (we feel strongly about crunchy toppings around here) 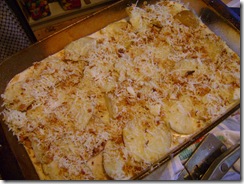 #5 – Use a hot oven, like 425°.  Regular scalloped potatoes have to go for a longer time, but because of the microwave head-start, these just need to be “zapped” until they are browned and bubbly.  Bake for about 20 minutes or until bubbly & brown.  Serve with fresh farmers’ market yellow supersweet corn and/or protein and/or whatever the heck you want.  Eat.  Enjoy.  (do you really need to be told???) 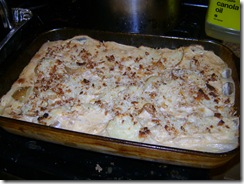 #6 – For a quick one-dish “fish chowder” casserole, use one layer of potatoes, then add a layer of any white fish fillets (frozen is fine, just make sure you bake long enough to cook fully), then another layer or two of potatoes.

Because it bakes for such a short time, I find that this recipe is tolerable even at the peak of summer.  The oven is on, and it’s hot, but not for long, so I can take it.  Speaking of which – it’s done!  Off to serve supper…