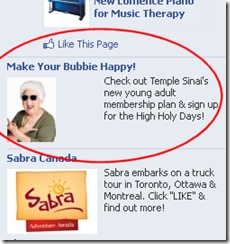 So what do you think of this facebook ad???  Is it weird, or is it just me?  I don’t even know if it offends me or if it’s wacky enough to fly under the radar.

Take note:  there are just oodles of important messages here…

A couple of shuls around here have run campaigns like this in recent years, including one that said, on great big posters, “Look, Bubby, we joined a shul!” (if I recall correctly).

I wonder about these ads because, well, why “Bubbie”?  Maybe because your cool Boomer parents would never interfere by suggesting that you worship in a Jewish way once or twice a year.  Nope, they couldn’t care less.  Maybe they’re not even members themselves!  (much to “Bubbie”’s chagrin)

So here are the crucial take-away messages, just so’s you won’t forget:  shul is a hassle, and it’s expensive, and you’re not really old enough for it to be relevant anyway, and you don’t get much for it in return except for a bit of intergenerational nachas.  But Rosh Hashanah is coming, so it’s the right thing to do. 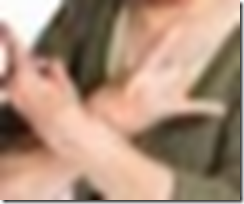 As Bubbie would say, “Word!”