Don’t forget to read my Parsha Poem and parsha overview.  And how about some great trivia game cards highlighting women of the Tanach?  Plus… copywork and parsha activities – something for every week of the year! 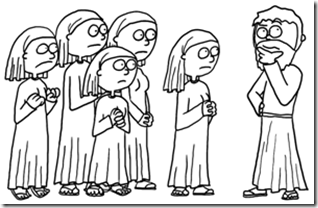 Hashem will always pay His debts
Whenever they are owin’
Chose the reward that Pinchas gets
Of being made a __________!

Five daughters are we, and father we’ve none,
But here we’ve arrived near the land to be won;
We want our fair share, so the Torah records
Our names fully thrice as our special rewards!  How many of us can you name?

Some say she’s the oldest woman there was
But wait; still more shocking news here is abuzz;
Though some think that she did pass through death’s portal,
Many believe she was truly immortal.  Who was she?

A word you might hear from a friend lost in Spain,
But this parsha tells us over and over again,
Hashem loved our gifts made from grains like granola,
But for special days, asked for an animal “__________!”

In this week’s parsha, we learn of the feast
We once all observed in our home in the East
And in the old days, at the start of the year,
It was not just the shofar we’d gather to hear!  What else was heard on Rosh Hashanah?

STUMPED?? Here are some answers:
[ 1 ] You have to pronounce it like the name “Cohen” to rhyme with “owin’”.  Nothing rhymes with “koHAYN.”
[ 2 ] Machla, Noa, Chogla, Milka and Tirtza.  OR Machla, Tirzah, Chogla, Milka and Noa, the order in Masei.
[ 3 ] Serach bas Asher.  She was alive when bnei Yisrael went into Egypt, and she’s still alive here.  Some believe she was among the few individuals who entered shomayim alive (Midrash “Eshet Chayil” on Mishlei 31:26).  More here.
[ 4 ] עֹלָה / Olah.  Literally, an “elevation,” but often translated as “burnt offering.”
[ 5 ] Trumpets.  Actually, this parsha doesn’t mention shofars, just blowing, but Vayikra 25:9 clarifies.  In the Bais HaMikdash, two silver trumpets were also used (Rosh Hashanah 26b).