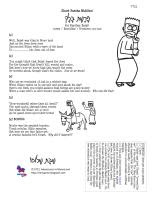 Don’t forget to read my Parsha Poem and parsha overview.  Plus… copywork and parsha activities – something for every week of the year!

Well, Balak was king in Moav land
Just as the Jews drew near
Summoned Bilam with a wave of his hand
To __________ the Jews out of fear.

You might think that Balak feared the Jews
For the thought that they’d kill, wound and maim,
But here’s how we know that this wasn’t the news
He worried about, though that’s his claim.  How do we know?

Who are we reminded of, but in a wicked way,
When Bilam wakes up in our tale and goes about his day?
Here’s one hint: you might assume that things are going wonky
When a man who’s so well-known would saddle his own donkey.  Who else did that?

“How wonderful where they all dwell!”
The navi spoke, through these events
But what did Bilam see so well
As he gazed down upon their tents?

Moshe was the greatest teacher,
Torah scholar, Bible preacher,
But here we see him falter yet –
A crucial halacha he’d forget.  Why did it happen???

STUMPED?? Here are some answers:
[ 1 ] Curse.
[ 2 ] Balak says bnei Yisrael “covered the eye” of the earth.  The Sfas Emes (1847–1905) suggests that the “eye” beholds physical reality – covering it drew attention to uncomfortable spiritual realities.
[ 3 ] This and other incidents (more) remind us of Avraham, who eagerly saddled his donkey before the Akeidah – but here, it shows Bilam’s greed.
[ 4 ] The tent openings faced away from one another for privacy (Rashi 24:2).  Or, he foresaw the Mishkan (Rashi 24:4).
[ 5 ] One answer says Moshe was caused to forget the halacha so Pinchas could claim his moment of glory (Bamidbar Rabba 20:24) – perhaps a sign that the new generation was ready to lead.