While we’re on the subject of Korach… 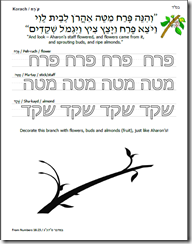 This is perhaps the first in a series of simplified parsha copywork for even younger kids.  Here, the parent reads the passuk with the child, who copies three words from the parsha.  There’s also a quick, simple drawing/colouring parsha activity at the bottom of the page.  I have tried to provide transliterations of the words so it’s English-language friendly for parents who didn’t have the benefit of Hebrew day school or homeschool parsha copywork!

There are four outlines provided for each word, but just ask the child to do as many or as few as you are both comfortable with.  (I usually ask for four because that’s GZ’s age, but in future, I may provide more outlines, because he sometimes likes to surprise me with extras!)

Use any medium you’re comfortable with as well.  Pipsqueaks (mini Crayola markers) are useful for writing in these outlines, but crayon is fine as well.  Pencil doesn’t work great because there’s not enough contrast, but that said, Gavriel Zev has been insisting on working with pencil lately because a) he thinks it erases (not the way he does it, but that’s another story), and b) that’s what Naomi Rivka uses, most of the time…

NOTE:  The first page of this 2-page download is the regular, advanced-level copywork for this parsha, in case you have older kids who’d like to try that.