Mmm… this was great; truly classic light Shabbos lunch fare.  Another delicious new favourite from the Kosher by Design Teens & 20-Somethings cookbook… (that’s a link to BUY the cookbook, but you can find the complete recipe here).

Basically, you round up all the basil your garden has to offer, throw in a half-cup of pecans, some garlic, sea salt, olive oil, lemon juice and mayo, whir it up in the blender… 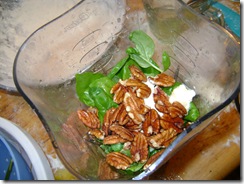 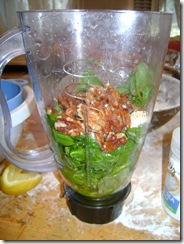 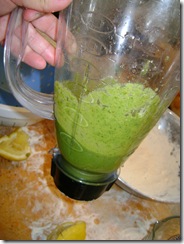 No recipe for this, but here’s what you’ll need:

And here’s what I did:

Here’s what the recipe looks like in the cookbook… 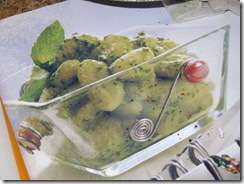 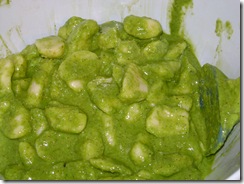 Blech!  Yes, they look like slimy boulders coated in bile.  But I assure you, it was absolutely heavenly.  I tossed in some small tomatoes cut in eighths just before serving to brighten it up a bit, and the flavours blended together just perfectly…

This was only my second time having pesto, by the way.  But yet again, it was a delight. In other Food Xenophobe news, I ate my first blackberry yesterday.  Needless to say, the USB port gave me quite a shock.  Ha ha ha… I joke.

No, it was a real blackberry, the fruit kind.  And honestly, I was somewhat underwhelmed.  It tasted like a cross between a delicious raspberry and, um, wine?  Or maybe just a not-so-great raspberry?  Maybe a grape, but there was definitely something earthier in the blackberry.  Earthier and coarse; where a raspberry flavour kind of seems to float ethereally, the blackberry tasted more like it’s tethered to the soil.

Hmm… several websites I just visited have me wondering whether what we have might not be black raspberries, based on the size and shape and the fact that they have a distinctive “rasp” in the centre which leaves them hollow when pulled away from the stem.  Still – not my favourite.

In other news, the real raspberries should be ready very soon – maybe even tomorrow!  And we might even get a few blueberries…!

What yummy stuff is growing in your garden???