The reason my blog won’t make me rich (a POLL!)

Loyal readers, please take a second to fill out this poll, and then read on to see a sweet little dolly I crocheted!

So here’s the reason this blog won’t make me rich:

…it’s not closely “targeted” enough to acquire a huge and regular readership.  Like this post, for example, which has nothing to do with anything except this little Kokeshi baby doll I just finished crocheting this morning.  Guaranteed to lose readership right there, though I did throw in an amusing glimpse of kosher cheddar and a grater. 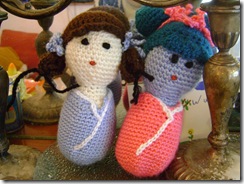 I think she’s a little better-stuffed than my previous attempt.  I also made her in more realistic colours – though I still think the blue/green one is appealing in a VeggieTales kind of way.

It’s hard to see her hair, but I’m 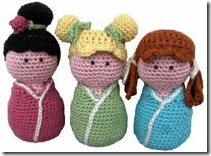 actually fairly pleased with the hair, which is the hangy-down type on the far-right model in the “official” picture.  The official ones have doll eyes, but, thanks to this video (and twenty failed attempts), I’m getting pretty good at just sticking on a quick French Knot.  The models also don’t have mouths, but I like my women to have a voice.  ;-)

Here’s a side view: 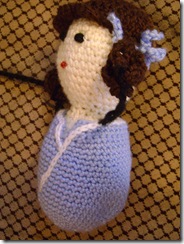 I assure you, regardless of the poll results, my next (planned) post is the regular parsha riddles!