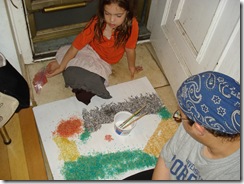 This being parshas Shlach, I decided it was time to revisit this Israel Map geography project from two years ago (I originally got the idea from ChallahCrumbs).

Last time, I used these little teeny pasta shapes (the authors recommend various multi-coloured foodie things, like beans, lentils, popcorn, etc), but this time, we had a bag of parboiled rice down in the potato room that somebody bought many months ago – so not only was it NOT a kind of rice we generally eat, but it was now kind of old.  Perfect for a homeschool craft project!

The concept here is SUPER simple, and great for just about any age from toddlers on up.  Draw a simple outline of Israel with its neighbours (and bodies of water), then “paint” each area with glue in turn and cover it with coloured rice (to colour the rice, I just tossed it in a baggie with a few drops of food colouring and a couple of drops of rubbing alcohol – the alcohol, I believe, helps the colour spread around nicely, though the parboiled rice didn’t take the dye as nicely as the pasta shapes did). 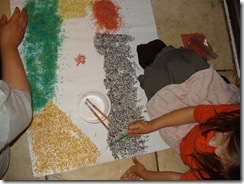 We did a few (non-adjacent) areas at a time, then I’d go outside and shake off the excess into the garden, which now looks like somebody has strewn confetti!). 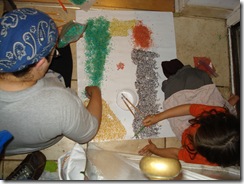 Last time, I decided to use split peas to turn Israel not only green but also give it a different texture, but this time, I just used green-dyed rice, so the map looks a bit flatter.  Either way is good.  I made the glue a bit thin (you have to thin it so it’s brushable), but it all worked out just fine, I think. 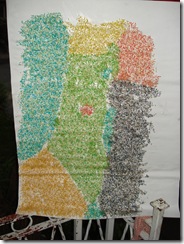 A little wide, perhaps… I just drew it freehand from a small printout version.  Today, Naomi noticed the different borders on the map, and we actually had a discussion about areas of Israel where Jewish people don’t live, essentially for the sake of peace (YM told her they decided there would be too much fighting if Jewish people lived there, which isn’t a bad way to put it). 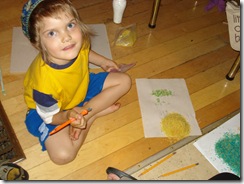 GZ liked the concept a bit, but was more enamoured of building giant “cakes” out of coloured rice.   I think he expected that they would stick, and he got very mad at me for pouring the “cake” off his paper.

Here are a few more ways to delve into the weekly parsha if you haven’t already:

How do you celebrate Israel with your kids???

(oh, and while you’re here, won’t you please take my quick blog poll if you haven’t already?)