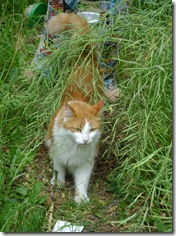 We cannot cannot CANNOT adopt a cat… but if we could, this loveable friendly kitty is the one we would pick.  It (we didn’t check if it was a boy or girl) turned up in our backyard on Wednesday.  YM (highly allergic, but who loves them anyway) took it to the vet to see if it was microchipped, and it isn’t.  He picked it up, wrapped it in a towel, and walked it all the way to the vet office on Eglinton… and back.  It is a beautiful cat, and up until Monday, well-groomed, obviously loved and cared-for (though who would love a cat and NOT microchip it is beyond me).

It hung around on Wednesday and Thursday, but City animal services say there’s nothing they can do – cats are “allowed” to roam in this city (duh).  Despite their advice to the contrary, I put out a dish of cat food – okay, I asked Ted to buy “the cheapest no-name cat food there is” so I could put out a dish of it for the cat.  Ted does NOT want a cat.  He likes dogs; he’s a dog person.  He has no idea about cats except that he once spent hundreds extracting rubber-snake bits from the stomach of a psychotic cat he didn’t want in the first place.

The animal services person was kind of uniquely moronic.  When I finally got somebody on the line and told her the cat had been out for two days, she asked, “how do you know that?”  I said, “well, that’s what the vet said, based on looking at the cat’s fur and paws.”  She told me, “well, that’s only the vet’s impression; he doesn’t know for sure.”  I said, and YES, I actually said it out loud, not just in my head like usual, “well, yes, of course – that’s because the cat doesn’t speak English, so it can’t tell us for sure.”  Sigh.  Ultimately, her answer was “release it.”  So we did.

The children ALL love the cat.  Naomi calls it Kitty, but I haven’t allowed anyone to bond with it, formally.  EC sat outside petting it for half an hour on Tuesday.  Gavriel Zev is the only one who seems indifferent to the cat’s significant charms – he ran off to collect ants.

Today, it is rainy and cold and miserable outside.  The cat, if it is anywhere, is probably rather damp.  I hope it finds its way home, but also, selfishly… I hope it comes back.