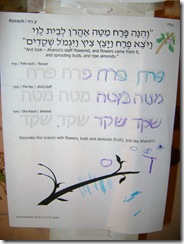 This has been an exciting couple of weeks of firsts for Gavriel Zev.  Little things, not anything anyone would notice unless they are with him every day and notice he is changing and growing (inside).

I think a big part of it has to do with being outdoors – almost all day, every day.  And the freedom to go outside basically whenever he chooses.  Naomi Rivka is jealous, but she’s out there a lot, and I think being alone and being outside are helping Gavriel Zev immensely.

So yes, this is his first copywork of any kind, parsha or otherwise, and I’m rather pleased with how he did.  I told him there were four of each word, but that he only had to do two.  At first, he announced – as he always does – that he was going to do all of them.  But I said he should do two of each and then go back and do more if he wanted to… because I know how that turns out; he bites off more than he can chew and then gets discouraged.

Anyway, he did two of each, and even coloured the stick at the bottom of the page and then announced he was done.  Dayeinu.  There will be many more to come, I’m sure.

Want to read about his first challah???