And don’t forget to read the poem and parsha overview for Parshas Nasso.  Plus… copywork and parsha activities – something for every week of the year! 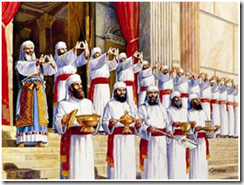 Last week in the parsha we learned several ages
Of Jews who all counted, through different stages;
But though all these numbers might sound kind of shifty
Levi’im, we learn, served from thirty to __________!

Three families of Levi, born one, two and three
But their tasks were not given out naturally;
You might think the best job would go to the first,
But instead, went to __________, so their luck was reversed.

A wife who was not the most modest and pure
Was brought before everyone just to make sure
She drank water drawn from this vessel of copper –
A reminder (how?) of ways far more proper.

The Nazir was one who would solemnly vow
To live for Hashem no-matter, no-how;
And while it lasted, wherever he’d traipse,
He’d never eat anything made out of __________!

The root of this parsha, and climax indeed –
Raising up all of us who from Egypt were freed;
The marriage, the princes, the blessing-spread hand –
All flow from this shoresh, the wise understand.  What is it?

STUMPED?? Here are some answers:
[ 1 ] Fifty
[ 2 ] Kehas, from the second son, gets the indisputably better job of carrying the holiest objects, while Gershon, the oldest, shleps the curtains.  The Kli Yakar says regardless of birth order, we can all attain spiritual greatness.
[ 3 ] Water from the kiyor was a reminder (Rashi 5:17) of the righteous women who gave up their mirrors.
[ 4 ] Grapes!
[ 5 ] The parsha’s name contains the shoresh (root) נשא/nasa, meaning “lift up.” It’s used for a census, but it’s also the root of marriage (nissuin/נישואין, recalled with the sotah), nesias kapayim/נשיאת כפיים (birkas kohanim) and nasi/נָשִׂיא (one of the 12 who brought their gifts here).