Pink Penguin… and a Scrap-topus

Elisheva loves penguins (so do I, I admit), and I have been wanting to use my newly-wicked crochet skills with this free penguin pattern.

Here’s the original (named Howie the Holiday Penguin, because he comes with a festive December-ish cap you can crochet for him)… 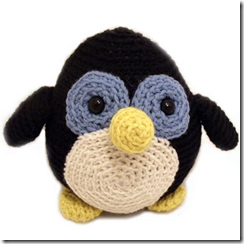 This is the one I made! 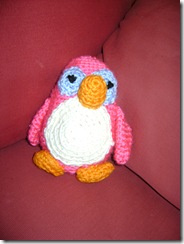 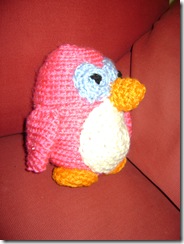 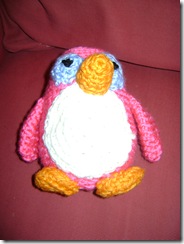 Somewhat pointy-headed and lopsided, with a VERY bulbous beak/nose… but still, I think, rather cute.  I propped him in the corner of the sofa, took his picture, then called Elisheva in to warn her “not to sit on the sofa.”  She asked why a few times, then peeked and pretty much screamed in adoration.  She appropriated him immediately and he’s been in her room with her other penguins ever since.  I warned her not to let anyone know of her weakness for penguins or people will buy her nothing but – as happened to my sister with elephants over the first 30 years of her life.

And, of course, if you have been reading this blog loyally since, oooh, January of 2008, when I went through a sock-creature phase, you’ll know that I have a soft spot in my heart for octopi.  And no, I don’t mean octopuses, I mean literally, PIE made of OCTOPUS.

Well, okay, I do mean octopuses, and if you must know, the correct plural – and believe me, I fought this, is actually OCTOPUSES.  My sister the grammarian explains that this is because Octo-Pus means “eight legs,” so legs is already pluralized properly in Greek, or whatever language it came from… so to pluralize the creature, in English, you just do it the regular way, by adding “es.”  Of course, it looks totally wrong with a single S… my inclination is to pluralize it “octopusses,” but that is not correct either.

So in response to Elisheva’s suggestion that I crochet an octopus, I went desperately searching for a pattern at ten to 6 on my way out the door to Naomi’s swimming lesson so I’d have something to do with my hands while I waited for her to swim.  Not finding a pattern, I took off with a small ball of Value Village yarn (part of a bundle of assorted yarns for $1.99, so basically FREE) and created this little freeform “quadropus”: 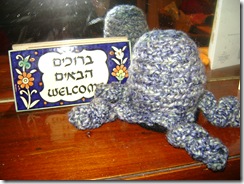 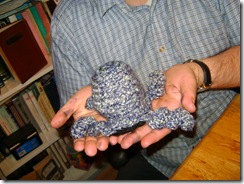 The yarn ran out after 4 legs, but I think he looks complete enough, so I just left him that way.

I didn’t have enough yarn to close off the bottom, so I made a circle with some Value Village black mystery yarn and sewed it on the underside.  I haven’t figured out what I’m doing for its face yet.  It’s a very dark, variegated under-sea blue tone, so I’ll have to find colours that will contrast well.  Haven’t decided whether to give him eye circles like the penguin yet or just embroider the features on with yarn.  My embroidery skills are not that great, however, and I think the circles give the penguin a really nice sense of drama.

UPDATE:  Here’s a picture of the finished quadropus – one eye is slightly puffier than the other, but otherwise, I think he’s sweet. 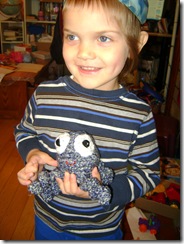 Like the penguin, the quadropus is stuffed with CLEAN used socks.  We had so many mismatched socks sitting around in the basement, both light and dark colours.  They’re athletic socks, so very fluffy and filling.  I cut them into rings and just push them gently (so as not to overstuff) into the corners of the critter.  I think the socks are slightly heavier than regular stuffing, but I don’t really MIND a few extra ounces – they are not surprisingly weighty when you pick them up or anything weird.

I was scared to use the socks for stuffing at first – I googled it like crazy to see if anybody else had tried such a thing before.  Apparently, it’s been done with panty hose.  Anyway, so far, there have been no terrible consequences.  I suppose they might bunch up more than stuffing over time… hopefully, cutting them into loops will help the socks resist the tendency of any stuffing material to wad up; it might even last BETTER than real stuffing, because they’ve been laundered many times and won’t lose their shape in the wash.  And hey, FREE STUFFING!!!