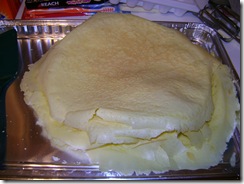 Other than a stack of blintz leaves, which I’m going to slice into lokshen, I’m not doing anything with eggs tonight, but since every single dessert calls for a million separated eggs (we don’t eat gebrochts, so there’s no matzah meal around here), I always do them ahead of time.  Now, they’re all lined up, waiting, in the fridge – each baggie neatly labelled according to its contents (ie 6W for 6 whites, though honestly, if you can’t tell whether it’s yolks or whites, you shouldn’t be eating it!).

I normally just plop the yolks into the baggies and they congeal somewhat, so I decided to mix in a bit of sugar (you can also use salt), which is a tip for freezing egg yolks.  These are not being frozen, but I’m hoping it will help a little. 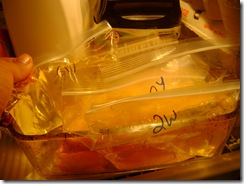 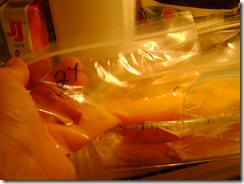 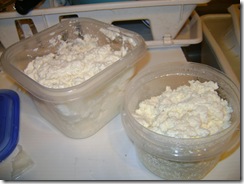 But I’d say the evening’s unqualified success is… CHEESE!  Not hard cheese; I’ve given up on making that, and just went and bought some today.

But here are batches of homemade ricotta (round) and cottage (square) cheese.  What’s the difference?  The ricotta is somewhat firmer and less tart (it’s congealed with citric acid aka “sour salt,” found in drugstores and every kosher aisle worth its salt…).  It also tastes somehow cheesier.

Here’s the ricotta recipe I used, though lots of sites offer variations.  Some sites say heat the milk to 185 degrees, others 195; basically, just UNDER boiling is what you want.  I added the citric acid AFTER it came to temperature; it seemed wrong to do it first, though other sites have confirmed that it probably works either way.

I used a variation on Alton Brown’s “Quick Cottage Cheese” recipe for the cottage cheese, but found that with the “vinegar” I’m using (KLP 5% acetic acid), it’s taking about twice as much acid to coagulate the milk as he suggests.  Is this because I used whole milk?  It is because it’s special Pesach vinegar?  (trying not to think too hard about the source of the vinegar; could be wine, but I read somewhere online that some acetic acid is petrochemical in origin… shudder) 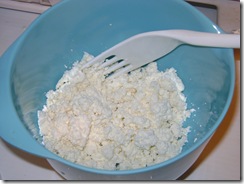 Because I used whole milk, these are both very creamy, rich-tasting cheeses.  Bland before salting, and then – ooh, delicious!  I don’t even like or eat cottage cheese, I thought, but this one is eye-poppingly good. 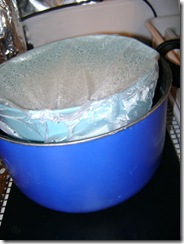 Still ongoing is the Great Yogurt Experiment.  I took about a litre of milk and added about 1/4 cup of “live culture” unflavoured Pesach yogurt.  It’s in a melamine bowl, sitting in a water “bath,” with a seed-starting mat underneath for warmth.  It’s been sitting there since 4pm and it’s still pretty liquid; I think I’ll wrap the whole assembly in a towel overnight to boost the temperature.

I did meet some resistance from the troops who were holding out for the individual flavoured yogurts at $1.49 a pop (and up!), who announce that this will simply Not be The Same.  Absolutely true… I hope it’s going to be BETTER, because #1, those yogurts are highly processed and mine isn’t, and #2, the store yogurts are mostly fat-free gritty yogurt that has absolutely no character.

I did promise that I will make 3 syrups to stir in to the yogurt:  coffee, strawberry and blueberry.  I have strawberries already, but no coffee, and frozen blueberries may be a bit hard to come by… maybe apple instead.  :-)  If there’s time, I’d love to freeze the syrup into cubes so you can just pop one out and add it to the yogurt a few minutes before eating.  I also bought a freezer pop mold so that if all else fails and nobody likes any of the yogurt, I can mix it with sugar and make popsicles!

I am so excited, doing all this; this year is absolutely the earliest we have ever turned over the kitchen.  Tomorrow – on to desserts and maybe other things.

What’s going on in YOUR Pesach kitchen???