The Worry Hat is DONE!

As y’all know, I have been teaching myself to crochet (here and also here).

Back story:  so there was an obscure and quickly-cancelled TV show called Firefly that was, according to YM, wonderful… and featured a guy who wears a hat… that looks like this. 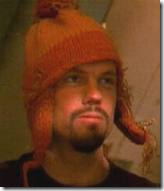 For Purim, he ordered a crocheted version of this hat on etsy, and when it arrived, I announced, “Hey, I could make something like that SO easily!”  (here he is with an unidentified sibling trying on a weird “hybrid” loom knitting-crochet hat I made for my sister Abigail’s birthday. 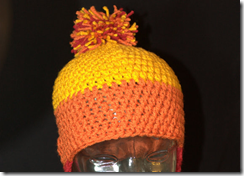 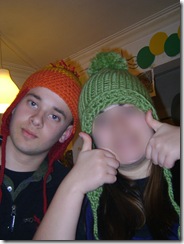 Anyway, needless to say, he already had THAT hat, but found another hat he liked in an alternative-ish (not really) online comic strip, Questionable Content.  In which there is a cute reference to a “worry hat.”

This has become a thing among the young and hip, and if you google “worry hat” (here – let me do it for you!) you’ll see that it’s a very basic design which many have now copied (some better, some worse).  And I told YM that if he was at Value Village and found yarn, I’d make him one.

Well, he brought me yarn which was exactly the right baby-blue colour, but it was awful yarn – all scraggy and torn-up, falling apart, though I couldn’t see insects or anything in it.  It was also scratchy and horrid-feeling under my fingers, and when I crocheted it, it felt like I was wearing a hair shirt.  Oh, plus, it was WAY too big.  So I unwound & redid it, and unwound & redid it, and finally, on Sunday, did it perfectly… but ran out of yarn with only a single earflap done.  And yes, it was still slightly too big, so I could have unwound it AGAIN, but I was just sick of that yarn.

And then yesterday, in WalMart, I found a ball in ALMOST the right colour of what is quickly becoming my favourite acrylic:  Red Heart Soft Touch, which I have used to create several remarkably non-itchy hats (considering my forehead is so sensitive that EVERYTHING itches!).

So here it is… in almost the right baby-blue shade (I tried running it through a slightly bleachy washload to “fade” it a bit)… a very cute Worry Hat.  Excuse the model; it’ll definitely look cuter on YM. 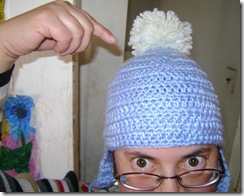 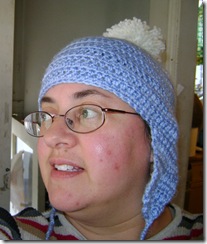 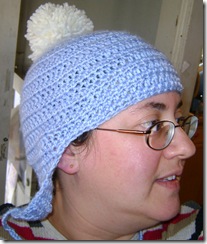 I love the pompom!  I made a little cardboard circle thingy for the pompom and I’m very pleased with how full and symmetrical it turned out! 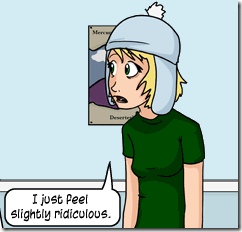 I know the feeling!