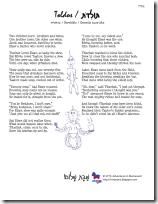 Copywork and parsha activities – updated weekly (though not THIS week; sorry!).

Artwork was drawn by Naomi Rivka for a different parsha poem she and I wrote together!

Two children born – brothers and twins,
One brother loses, the other one wins;
Jacob was innocent, dwelling in tents,
Eisav a hunter who never repents.

Yizchak loved Eisav, so tasty his stew,
But Rivka loved Yaakov, forever a Jew;
The two grew up, side by side,
Until one day, when Avraham died.

Their zeidy was old, one seventy-five
The years that Avraham had been alive,
Now he was gone, and not incidental,
Yaakov made soup, cooked out of lentil.

“Yummy soup,” bad Eisav moaned,
Knowing soup could not be loaned.
Soup can only be given or bought,
He traded for it, straight from the pot.

“You be firstborn, I don’t care,”
“Bring korbanos, I won’t share.”
For Eisav, stew was quite enough:
“Just give me all that red, red stuff!” 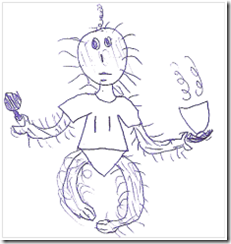 But Eisav did not realize then,
What would happen later when,
Yitzchak, older, soon to die,
Gave his brachas by and by.

“Come to me, my oldest son,”
He thought Eisav was the one.
Rivka, knowing better, sent
Him Yaakov, so he went.

Yitzchak reached to bless the eldest,
Drew in close the one who smelled best;
Little knowing that those clothes,
Were swapped and thereby tricked his nose.

Later, Eisav came back from the field,
Presented meat to his father and kneeled,
Awaiting the blessing, awaiting the joy,
That came with being the eldest boy.

“Oh, dear,” said Yitzchak, “I just got through,
“Bentsching someone I thought was you.”
“No!” screamed Eisav; he knew in one swoop,
The vast mighty riches he’d traded for soup.

And though Yitzchak may have been blind,
He knew the nature of his older son’s mind;
Realized then Yaakov’s hidden greatness...
So he didn’t mind (at all) Eisav’s lateness.