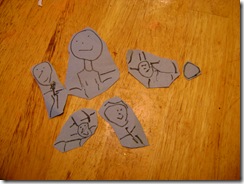 At the age of 3.9, after being told that the printer was out of paper so I couldn’t make him any more worksheets to cut up, Gavriel Zev finally drew!

He drew two people, a “doggie,” a “catty” and a moose.  And then cut them out, of course.  He LOVES paper dolls.  The construction paper he picked up already had shoulders and a neck drawn on it – I envy people who can keep their craft supplies pristine! – so that explains the big guy in the centre with the really nice head, neck and shoulders.

But as with walking (which he did at around 21 months), I seriously never thought he would spontaneously pick up a marker and draw for pleasure.  I am glad that the results were reasonably close to recognizable.  Hopefully, it will encourage him to try again soon.