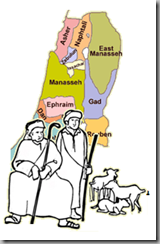 Well, Reuvain and Gad had sheep in the mud,
Yes, some very fat sheep had they;
They knew what they planned,
So they asked for some land,
Just across from Israel it lay.

But behind his beard, old Moshe feared,
Yes, feared for their lives, did he;
So he said “You’re disloyal,
To Hashem great and royal –
Don’t leave His company.”

“Oh no, we’d never,” said those men so clever,
Yes, men so clever, those tribes;
“You see, we’ll come too,
And we’ll fight with you,
So please go and alert your scribes.”

“Well, if that’s the case, then I’ll just erase
Yes, wipe out your evil decree;
You’re welcome to run,
When the battle is won,
But ‘till then, just stick close and see.”

So what became of their mighty names?
Yes, the mighty Reuvain and Gad?
Well, they did get their land,
With their sheep close at hand,
And Israel was won with their blood.

Fought with the rest, but did not do their best,
Their true best to follow Hashem;
Their bargaining shrewd,
But priorities skewed,
For Israel meant nothing to them. 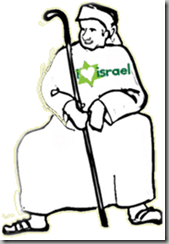 So their life was not great, nor was their fate,
No, their fate was not happy at all.
And from living apart,
Their children lost heart,
And in tears, they later did fall.

And today in our time, it’s never a crime,
No crime to write cheques with our hands.
But it’s also our feet
That Israel wants to meet -
So let’s dwell on its holy, hot sands!