Printable PDF version here.  Bonus:  “Hearing the Message”, a one-page poster summarizing the theme of each of the 5 books of the Torah (connects with the poem).  PDF downloads here:  Ashkenaz, Sefard. 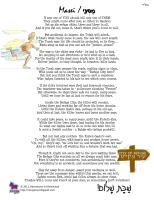 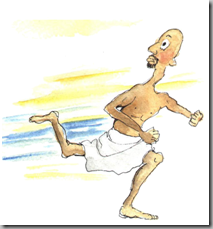 If any one of YOU should kill any one of THEM
They might come after you, so listen to Hashem
Set up six refuge cities, three and three in all,
And if you did not mean it, that’s where you’ll come to call.

But accidents do happen, the Torah will admit,
If that’s what really came to pass, the law will soon acquit.
The Torah says his life should be protected, so he flees,
Runs away as fast as you can ask for “justice, please!”

The way to the cities was risky – he had to flee so fast,
No stopping to ask directions or he’d wind up in a cast;
For the family of the dead man might take it in their hands,
Deliver justice, so they thought, in forsaken, hilly lands.

So the Torah says prepare the roads, making signs so clear,
With posts set up to show the way – “Refuge City here!”
But lest you think the Torah says to save a murderer,
Wise judges listened to his tale to see which ones concur.

If the folks involved were first and foremost enemies,
The murderer was taken in – policemen shouting “Freeze!”
But otherwise, he stays there safe for many, many years,
Until we hope he has at last no reason for his fears.

Inside the Refuge City, the killer will remain,
Living there and working far off from his home domain.
Until the Kohein Gadol dies, perhaps in his old age,
And then at last, the killer leaves and turns another page.

It could take years, so many years, until the Kohein dies, 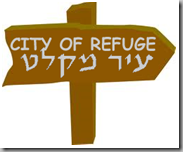 While the killer lives there, just hoping for his demise
So what our rabbis said to do so none can wish him ill
Is send a Jewish mother – a Bubby who brings goodwill.

But not just any mother:  the Kohen Gadol’s own,
To visit all the killers, with bagels and produce home-grown.
“Oy, vey,” they’d say, “we love her so, and wouldn’t want her sad,”
And so they’d hold off wishing him a fortune that was bad.

Though it might not seem fair to the men waiting there
The Refuge City reminds us all we always must take care,
Even if they’re not murderers, just accidentally nicked,
Not everything is an accident, and sometimes you can predict.

Stay far away from danger, guard your neshama so well,
These are the messages deep within this parsha, we can tell;
Safety comes first, avoid bad folks; always do steer clear,
Trouble WILL come and knock at your door, so remember:  don’t volunteer!