Life on the Ferris Wheel 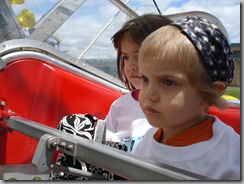 Another Toronto homeschool blogger posted this week about her 12-year-old getting picked up by the police – for walking home from camp.

In the bank the other day, I left Gavriel Zev (3.5 years old) in the waiting area.  He was playing with a globe we had found at the curb and a metre stick.  He is typically very BAD at waiting, and I was happy he wasn’t screaming or melting down, for a change.

After a few minutes, a manager came up and told me, "a man is talking to your son."

Yes, in the waiting area of Scotiabank, in broad daylight, with tons of security cameras around, my 3-year-old was HAVING A CONVERSATION with a stranger.

But he wouldn't drop it.  "I thought you'd want to know.”

“Thanks for letting me know.  As long as my son isn’t disturbing the customers, that’s okay with me.”

Frankly, it was MORE than okay.  It was GREAT.  This is the kind of intergenerational socialization that John Taylor Gatto talks about – real communities that are made up not just of a child’s own age cohort.  So I was thrilled, but I didn’t tell the manager guy that.  So he continued.

“Because I don’t know about you, but if it was my child...”  I think he went on to suggest he was careful who his children talk to.  Nice!

“But they’re just having a conversation?”

“Well, okay then.  That’s okay with me.”  I figured I’d have to make it very explicit.  “I don’t mind if he talks to friendly people who aren’t going to hurt him.”

“Okay, that’s a good idea.  I’ll watch the door to make sure he doesn’t leave.”

At which point, I guess the guy decided he had no ground to call Child Protective Services, or whatever we have here that polices irresponsible mothers like me.  He walked away with a shrug, probably still muttering about what he’d do if it was his kid.

And GZ kept on puddling around with his metre stick, and didn’t cry or scream, and didn’t escape out the two sets of heavy double doors, and the nice folks eventually let us do our banking (I had to beg) and let us get on our way.  All’s well that ends well.

But for that manager, it was probably a near-miss – 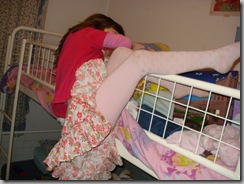 a risky situation that I handled badly.  It’s easy to just dismiss people like that as morons (well, for me it is), but the truth is, I think they really DO believe they are better parents than folks like me…. and you?

(here’s a picture of Naomi getting into bed… see her ignoring the ladder?)

Have someone ever stopped your kid from doing something completely safe???  (if so, check out the Free Range Kids blog and book!)