Story of the World – and a kid who hates to colour 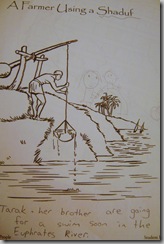 Many of the student pages in the Story of the World Activity Book are actually just colouring pages, and I was dreading getting through a year of colouring with her.

But I do think the pictures are well-done and helpful, so I want her to look at them… and that’s when I realized:  I couldn’t care less if the pictures end up having colour.  And that she really, REALLY loves to draw and/or doodle.

Which is how I came up with the brilliant idea (though probably hundreds of parents have come up with it before me) of having her DOODLE on the history pages instead of colour them in.  Constructive doodles, doodles that relate to the story and the time period and the setting.

Here, she has drawn Tarak, the fictitious nomad child from Chapter 1, and her obnoxious brother, getting ready to go for a swim in the river Euphrates.  I showed her the rivers (she coloured the mapwork on the reverse side) and made her pick one as the setting for her picture.  I wrote the caption.

The kids are drawn VERY faint because we had a VERY busy day and she was pretty near the end of her rope by the time she did this and we were rushing to get to the homeschool drop-in.

But I really do believe she learned more today, and it will stick longer, than if she hadn’t interacted with the picture at all.