High:  the peonies opened on Yom Tov!!!  Only three blooms right now, with a potential fourth bringing up the rear.  But there were NONE last year or the year before that, so I think they’re finally getting its bearings in the “new” spots… 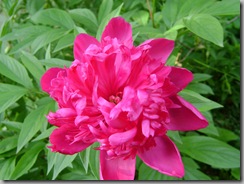 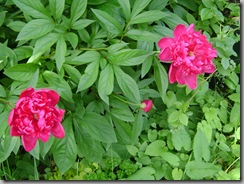 The second clematis opened – and it’s a different kind altogether!  Last week’s was Nelly Moser; this week it’s The President.  I bought these two as end-of-season bargains 3 years ago and they promptly “died.”

There was a little growth the following year, but only one flower.  Last year, I got TWO Nelly flowers but reported sadly, “not a sign of the President anywhere.”  So, again, PATIENCE did it… just waiting this thing out, waiting almost THREE YEARS for it to find its sealegs in my stunted sad shady garden.  And here it is: 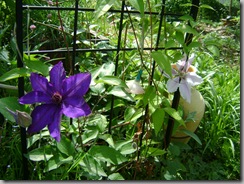 Well worth the wait, in my opinion. 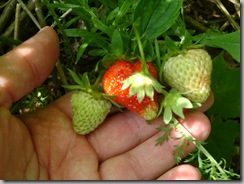 This is actually a “stray” June-bearer that wandered out of the officially strawberry bed.  They’re tasty fruits, but I replaced them in the main bed with an everbearer so we’d have something to look forward to all season long.  Best of both worlds, maybe?  A nice crop of June-bearing strays, plus a steady supply of everbearers.

Now for the lows… get ready.

Garden Low #1:  Something’s been at the above-mentioned strawberries.  Drat!  The regular patch is under chicken wire but the strays aren’t, so there you go. 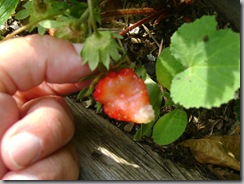 Low #2:  Spinach bolting before we could eat any.  It ALWAYS bolts on the first scorching day, no matter how long it’s been cold and how few harvestable leaves it has produced.  I should just not plant spinach.  Chard does much better back there. 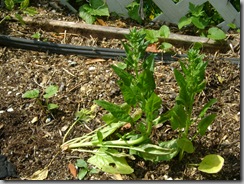 And finally, Garden Low #3:  To add insult to injury, you see how the bolted spinach looks like something has squashed it?  Well, something indeed squashed it… in order to (as my kids say) “go make” in the garden bed. 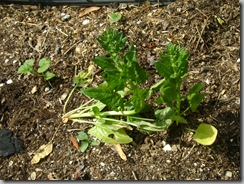 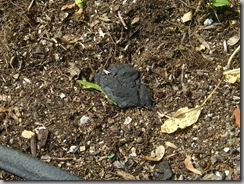 Lovely.  As they say, “into every garden, a bisl zun, a bisl regn.”  A little sun, then a little rain.  And we can’t survive without either.