Parsha narrative overview here.
No copywork this week – check back at the regular page next week!

Thanks to Marc Chagall for this week’s amazing paintings! 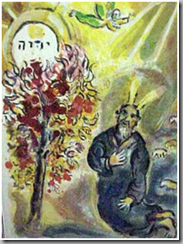 Each one so special, each day of the week.

Once a family of twelve, Hashem’s bounty has shown;

Separate still, serving in their own way,

Was the shevet of Levi, still known to this day.

You’d think that a people who’d been under stress,

Would not have grown so to be more – only less;

But slavery truly helped Am Yisrael,

We grew, for Hashem and his brachos can’t fail. 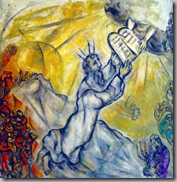 But in all this counting and naming of sons,

Two are quite absent – so who are those ones?

They’re the children of Moshe, left off of the list,

For they grew up in Midyan, and so they are missed.

I sometimes wonder if Moshe regretted,

Leaving his children when he left and abetted,

The rest of his nation in their time of need –

Instead of remaining and growing his seed.

It sometimes is true that a leader’s own kin,

Are not always where his hard work can begin;

And it also is true that despite their strong roots,

All plants must work hard to sprout their own shoots.

So perhaps Moshe spent too much time on the road,

Or perhaps his two sons could not carry his load;

But this parsha shows too that, despite this sad lack,

Hashem found a way to pay Moshe right back. 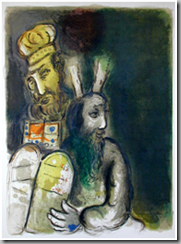 For we learn in this parsha that a teacher can be

A parent of sorts in Hashem’s family;

When it lists the children of Aharon right there,

They’re “descendents of Moshe,” for his love and care.

A family is not just the folks that we’re born to,

It’s also the people who do what they’ve sworn to;

Raising each other in Torah and love,

And sticking together when push comes to shove.

Counting shows, Hashem knows, that we’re not all the same –

And He loves us so much that he calls us by name.