On Life. Why I love it but am not always “pro” it. 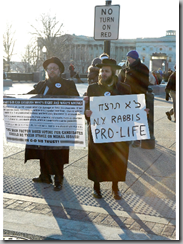 I’m always sad to see Jews out holding placards where I don’t feel Jews should be.

The original post is here, written by a thoughtful blogger whose articulate, well-thought-out views I understand and respect in light of her Catholic faith.

But the Catholic perspective is NOT the Jewish perspective, and while Christians may feel encouraged to see Jews standing with them at an event like this (in this case, protesting Planned Parenthood’s “one-choice” presentation of the case for abortion), it maddens and frightens me to see a bearded guy holding up a sign interpreting the Hebrew words “lo sirtzach” as justification for an extreme and literal Christian pro-life position.

The words “לא תרצח/lo sirtzach” on the sign do NOT mean “don’t kill.”  That would be something like “לא תהרג/lo saharog.”  My Hebrew is lousy, but it’s easy to see that it’s a completely different word – as it should be, because there’s a BIG difference.

Everything I’ve learned tells me that Jews believe in the subtlety of Torah, in the Pardes, the complex “eilu v’eilu” (“these and these are the words of the living God”) interlayering of meaning that lends nuance and subtlety and the phrase “personal circumstances” to what some might perceive as the Pharisaic absolutism of Law.

Yes, I believe that in most cases, women with unplanned pregnancies are very poorly counselled by organizations like Planned Parenthood.  Like, “poorly” to the point of ridiculous understatement.

I even noticed this during my one sad experience with one of these abortion factories [Sidebar:  This happened when an ultrasound revealed that a very early embryo had died but not miscarried yet.  Rather than waiting I had a d&c so I could try again.  Gavriel Zev was conceived not long afterwards.].

During my mandatory counselling session, I felt their discomfort (ha ha ha – because that was their word for what I’d feel during the d&c!) with my repeated use of the word “baby.”  Their discomfort even with my presence, knowing how much I wanted a baby.

I sensed that they were eyeing me nervously, perhaps hoping I wouldn’t make a fuss or start screaming at the dozen women coming through that morning to kill their unwanted children.  Their babies.

I do believe, from my Jewish perspective, that for most intents and purposes, what is inside you from the moment of conception is a baby.  I hoped and longed for a baby and a baby was what I got – the minute that line appeared on the pregnancy test, or, really, a few days before that.

But it is my understanding that the Torah, in its wisdom and nuance, does not state that this baby is the equal of any living person.  It doesn’t really attribute personhood, from what I understand, to anybody who has not lived 30 days outside the womb.

Yes, that sounds callous.  But even in our modern society, we shouldn’t take for granted the miracle of quickening, birth, new life.  It doesn’t always go so smoothly, so halacha (Jewish law) in a weird way outlines these harsh situations in a matter-of-fact way that may indeed seem unmodern, uncaring:  to be fully recognized as a person, the baby must be viable, be born, spend at least some time doing “person” things in our world.

If all that doesn’t happen, it’s still a tragedy, but it’s not death in the same way that, say, my father’s death was, or Nanny’s, or the Fogel family in Israel.

Of course, that doesn’t mean you can go around killing babies, but it gives you some nuance, shades of gray, room to negotiate if the mother’s health – physical and perhaps psychological – are in danger.  If a mother is in danger, the baby can, under certain circumstances, be considered a rodeif, a “pursuer,” and the pregnancy possibly terminated.

But not – here’s the important part – without counselling and rabbinic consent and serious soul searching into the implications, the MEANING, of what you’re doing.

Jewish law says iy”h – “God willing, we should never know this.”  It says chas v’shalom - “God forbid we should ever have to know this.”  But it acknowledges, at least, that NEVER is an awfully long time, and some of us do have to face unfaceable, unspeakable horrors.

Those guys in the picture are saying “never,” loud and clear, and what’s worse, they’re telling everybody that that is THE Jewish position.  It makes me sad, and yes, even a little angry, because that is nowhere near what I believe.