Naomi just went downstairs and announced to YM:  “Helen Keller is on the Alabama State Quarter!”   I have no memory of ever telling her any such thing; I probably read it to her off a website somewhere.

Anyway, she sat on his bed and waited patiently for him to find it in the great mess of quarters he’s been collecting pretty much since birth.   Of course, he had one, and there she was.  Both kids just came up proudly to show it to me. 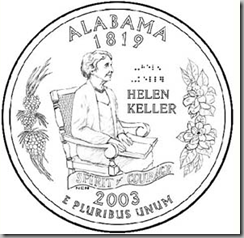 After they went down, Gavriel Zev announced:  “Helen Keller wrote the Alabama song!”

“Yes, I really think she did!” he insisted.

Well, of course.  A couple of weeks ago, Elisheva and I were joking – well, Elisheva was making fun of ME because I was bragging about all of Helen Keller’s accomplishments, and I don’t know who started it, but we started just making them up.  Including, of course, crediting her with the composition of the song “Oh, Susannah.”

And GZ heard, but he thought we were serious.  He’s now sitting on the floor, playing with his cars and singing them “Helen Keller’s” song.

Just to dispel the rumour putting this fact out on the Internet will invariably spark:  Helen Keller did NOT have anything to do with writing “Oh, Susannah.”  That I know of, at least.