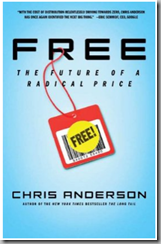 Free: The Future of a Radical Price, by Chris Anderson

And let me clarify.  If you want to hold an actual book made of actual paper in your hands, you may well have to pay money for the book.  In my opinion, it’s as worthwhile as any other, but like most books, I ended up reading it for free from the library.

But I have since downloaded the full-length unabridged audiobook version at the author’s site here (there’s also a free full-length readable online book there, so you truly can READ it for free if you want to). 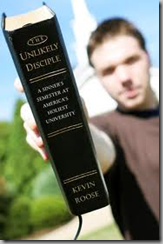 It’s been a great week for the bookshelf, as I also drank in this easy, fun book over Shabbos:

The Unlikely Disciple: A Sinner's Semester at America's Holiest University, by Kevin Roose.

Much as I love books that simply poke fun at evangelism and extremist Christianity, this book doesn’t happen to be one.   For the most part, it’s a thoughtful behind-the-scenes glimpse of its liberal author’s semester at Jerry Falwell’s legendary fundamentalist Liberty University.

I like the fact that he seems to take his own spirituality – and his quest for understanding of Christianity – seriously, and goes as deeply into the subject matter as practicality permits (for example, he never allows himself to lose touch with a lesbian aunt and her partner, though he does avoid their phone calls for a couple of weeks here and there).

If he went into writing the book hoping to caricature Christian youth, as has been done many times before, he emerges with a far more nuanced picture of what they believe and the deep meaning they find in their spiritual lives.

So there you are:  that’s what I’ve been reading!