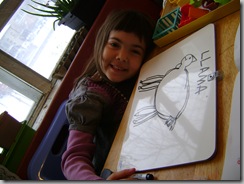 When we were finished geography, Naomi knew we were having Draw Write Now time.  As usual, though, she needed to turn things around first and host her own art class.

In true DWN style, she instructed me step-by-step on how to create this attractive llama, complete with erasing a couple of lines where the head attaches to the neck and the neck attaches to the body.  Most of the lesson consisted of adding “strings” around the llama, and a kind of a thick coating around its body.  It looks nothing like a llama, but it was a good lesson!

For Draw Write Now, I insisted that she create an OUTDOOR scene with absolutely NO medical personnel (unlike her hospital-with-pigs drawing from last time).  We practiced the sheep one more time on the whiteboard and then I gave her a piece of special paper with space for drawing and writing.  My other rule was that she had to colour her drawing in, which she rarely has patience for. 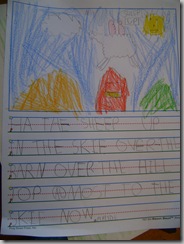 Here’s what she came up with:  two hills, a barn, sun and cloud – and a flying sheep.  This is my fault.  When I was demonstrating how changing the legs can make the sheep look stationary or active, I added wings to make it look like it was flying.  I guess she liked the wings.  Sigh…

Oh, and I also participated, creating what is – and I say this with the utmost pride – my absolutely best drawing EVER of all time.  Uninspired?  Derivative?  Certainly; I admit, it’s mostly copied from the book.  But I have seriously never drawn anything that looks like anything, so this really worth bragging about!!! 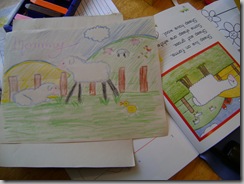 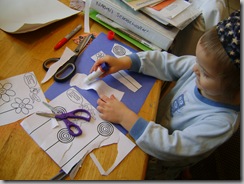 Lest you think I was neglecting the GZ unit, here he is on the other side of the table, holding his own on the preschool front.

Sick of “same/different”, and wanting something he could do independently, I printed two of these scissor practice pages, but he quickly decided he didn’t want to just snip the stems and sticks in straight lines; he wanted to cut the flowers and lollipops out.

I suggested he use a glue stick to make a picture out of them on a piece of construction paper.  Perfectionist that he is, every time he accidentally snipped over one of the lines, he’d throw it away and insist he wasn’t cutting anymore.

I had to give him a pep talk to keep him cutting (“See?  it’s not ruined!  It’s just a little close to the line.  That’s completely okay!”), but overall, I’m pleased with how he stayed on-task.