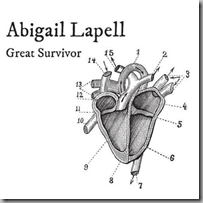 My sister’s been hard at work on a  new album, and here it is!

Seriously, this is a very slick endeavour, all professionally produced and studio-recorded and, well, I don’t know much about these things, but it’s on a real CD and everything.  She’s planning on spending the better part of the summer touring.

The album is coming out… well… erev Pesach.  Not quite, but just about.  So we’ll have five days to listen to it before Yom Tov starts – but that’s neither here nor there!

I will warn you now – there’s nothing particularly Jewish about this album, despite her wonderful recording of the Sevivon song.  I hope she doesn’t mind my saying so.  I hope I haven’t missed some discreet Jewy nuances. 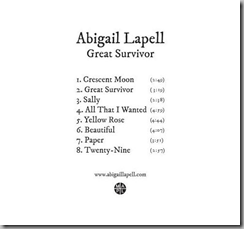 But don’t let that stop you!

Buy the album by clicking on either album-image link, or just listen to amazing sneak-preview full-length singles here!  I cannot believe somebody this talented is related to ME.  Not that Sara isn’t talented, but believe me, Abigail got my share of musicality, that’s for sure.

Oh, yeah, it’s also her birthday on Tuesday and I still haven’t thought of a present.  Drat.

Don’t tell her, but the labelled spread-open heart image on the album reminds me of my father, who struggled for 14 years with a  debilitating heart condition.  Though he wasn’t, ultimately, the greatest “survivor.”

I doubt that’s what she intended; that would imply a bitterness that isn’t really there… I think.  I wonder if it disturbs other people in my family, or if it was accidental…?  Coincidence?  I tell myself that people with Masters’ degrees in smart-people subjects don’t have coincidences.