Three homeschool posts in a row… so it’s time for my other fascination:  FOOD!

This is a Yummy Thing I have been doing with instant noodle soups. 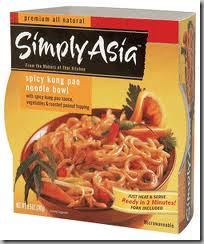 For a while, I became quite addicted to these noodle bowls – especially the Spicy Kung Pao peanutty variety.  The noodles are fat and fresh and the “soup” is delightful.  However, they are impossible to obtain now, so I have been forced to improvise using cheap “just add boiling water” noodle soups.

Forced, I tell you.

The noodle soups are not nearly as delightful – the noodles are thin and mushy, not thick and chewy like in the noodle bowl.  And yes, I know, noodle soups are high in fat and starch and salt – plus the plastic/styrofoam container is bad for the world.

But this is an occasional snack treat, not my family’s staple diet, so there.  And it does, somehow, hit that peanutty-Asian spot in my tummy… just about perfectly.

So here’s how you do it: 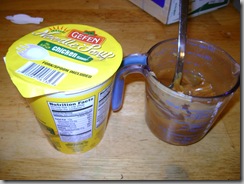 3.  When water boils, pour it into soup as usual. 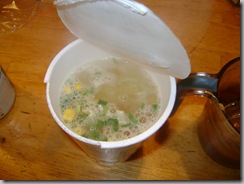 4.  Spoon in the peanut-butter plop mixture. 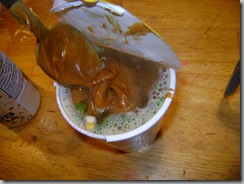 5.  While you wait for it to steep (3 minutes or the time it takes to get the folding table set up in the bedroom), marvel over the ridiculous folding spork included in the soup packet. 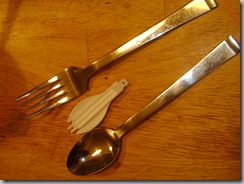 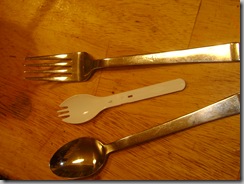