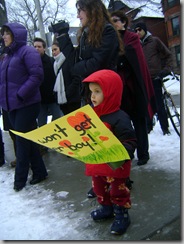 Yes, I’m turning my children into activists.  This is actually only the second demonstration I’ve ever attended with them (the first was an anti Kahane Chai rally I took the older children to a million years ago).

This was a gathering to show support and try to bring home “Daniel,” a child on our block who was taken from his long-term, stable foster home by JF&CS almost a year ago.  He’s been in a group home ever since, with kids much older and more troubled than he is (or at least, than he was).

Considering the cold, considering people’s apathy, considering a whole bunch of other things, I’m very impressed with the 40-50 people his old babysitter was able to rally to show up on a Sunday afternoon and makes some peaceful noise on one boy’s behalf.

The sign GZ is holding reads “we won’t get another boy,” a reference to “Daniel”’s plea to his parents to not just replace him now that he’s out of their home.  As if they could.

Here’s me with MPP (provincial minister of parliament) Rosario Marchese, making my little speech (text below) into a microphone on the snowy lawn of an elementary school near the group home. 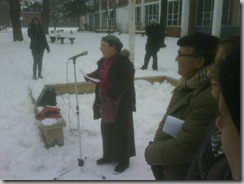 I guess we’re lucky that it’s an election year.  And also that this seems to be Marchese’s pet project:  he’s actually sponsoring a bill to make Children’s Aid Societies here accountable to a general ombudsman.

Apparently, right now there’s little oversight of CASs, which means that not only do children get removed from great foster homes, they get killed in lousy ones.  Clearly, the system is VERY broken; I hope it gets fixed soon, though I worry it’s already too late for “Daniel.”

My mother and sister came along, which is touching because they have both experienced the somewhat klutzy hand of JF&CS in their lives.  Ted had to work, and Elisheva couldn’t make it, but YM came and enjoyed the pomp of it all, marching and carrying a sign (he also loved the Kahane Chai rally, a million years ago; who wouldn’t want to be in a parade?!).

Here’s what I said.  It’s actually borrowed from this post, from October of 2009.  Everybody else spoke about the current tragedy – so I wanted to offer a perspective on the happy side of things; the way fostering CAN create a home, if we let it and don’t let the CASs behave like gods in our kids’ lives.

Have I ever mentioned our foster kid? He's not ours, exactly, but some days, it sure feels like it. He lives down the street with his real foster parents, who went to our shul for a while, but then switched to somewhere else.

Some days, especially on Shabbos when I'm trying to lie down, he wanders past our house, staring longingly at the porch. If he sees any signs of life, he'll shout to us and ask to come in.

Naomi Rivka and Gavriel Zev are crazy about him - he's ten years old, so it's very flattering that he spends time with them. If they're out on the porch, they'll start screaming his name and begging him to come in.

The older kids, not so much. To them, he's just a pain. I tell Elisheva he could be Eliyahu ha'Navi (Elijah the Prophet) in disguise, but she still sighs and groans.

He sometimes comes over asking to read to the younger kids. They like it, but they also know his reading is a little challenged. I have to help; if they pick too hard a book, he gives up on Page 2. If the book is too easy, he's not interested. It has to be just right for him to stick all the way through.

He's been raised religious, but perhaps because of his challenges, he's only just now learning Hebrew, so he likes to practice with Naomi Rivka. He's not allowed to say where he goes to school ("it's a private school").

Last Shabbos, he came in as we were setting up for lunch and when he noticed food was arriving soon, asked if he could stay. I said it was up to his parents, so he ran and asked them and ran back to say yes. It was actually a pleasure having him for the meal. Why not? He doesn't eat much, and keeps the conversation lively... and keeps Elisheva's eyeballs rolling.

Usually, when he arrives, he'll look at the clock and announce something dire like, "I can only stay for two hours… six hours… eight hours." He never stays the whole time: after maybe 20 minutes, maybe 45 or more, he'll sigh like an old man with the weight of the world on his shoulders and say he's going home now.

Someone told me that he wasn’t allowed to spend time in our home unless we had been cleared by the agency. I don’t know if this is true; I know there are tremendous restrictions on foster parents, but what am I supposed to do?

To me, I'm just part of the village that’s raising this kid, because, for whatever reason, his birth parents couldn't do the job. It shouldn't all fall on the foster parents; whatever money they're getting, it’s not enough to take on this kid:  forty-five minutes; two hours; we’re exhausted.

At least the foster placement seems to be working; he's been with this couple around four years and seems quite happy.

It's a relief, after hearing so many awful things, that the system sometimes works: that sometimes, a couple takes in a kid and it's a good match, and everybody benefits - including our family.