Why am I so quiet? My Anniversary Tribute to Ted

No, I’m not quiet because it’s the middle of the night and I’m sleeping; silly…

It’s because I let about four actually paid writing deadlines slip past in the blur of homeschool – cook – shlep – etc that is my LIFE THESE DAYS.

Three down, one to go, and that one is almost done… yay!

So why am I paying tribute to Ted?  Well, I’m not… but a while back, one editor at the CJN emailed me to say there was a bridal / anniversary supplement coming up, and did I know anyone with a special wedding / anniversary story?

So I said no, the only anniversary I knew about coming up was my own 7th (this was back in November).  She emailed me back to say that would be great – 400 words, due end of December.  Aaaagh!  400 words about my marriage???

Well, not really a hellhole, and I’m not really trapped… but it is a crazy busy place and time in our lives and we often fail to stop and appreciate each other with deep mushy glances into each others eyes.  Okay, I am often miserable.  Both  miserable inside and miserable to live with.  There it is.  I am often a “B” with a capital “B”.

#3 won out, and I finally got around to writing it last week… and just your luck, here it is! 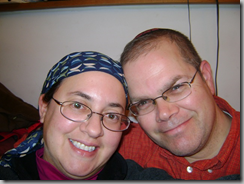 In Judaism, seven represents wholeness, nature, the entirety of creation. Seven days, and G-d rested… does that mean we can rest from creating our marriage? Fat chance.

I already had two kids when we married, which means we now have two teenagers plus two kids together… and putting off a real honeymoon for a few more years.

It also means we’re tired. Our neighbours just had their first baby, and it’s fun to watch the unabashed adoration they toss at him so casually. He is truly the centre of their world, just as, before he came along, I suppose they were the centre of each other’s world.

It’s funny: I wrote about Ted a lot before we got married. About our interfaith relationship before he converted; about introducing him to my kids. Then, he pulled a veil over my face, met me at the chuppah… and I’ve written nothing about him since.

We’ve both been too busy to catch our breath.

For seven years, we have literally been creating a world, a universe in microcosm: Spheres orbiting, trying not to crash, dodging meteor showers and the occasional black hole.

A few years back, my parents celebrated their fortieth anniversary; Ted’s parents are long past fifty. Married older, I know we will probably not have all those years together. But fifty percent of marriages don’t even make it this long. Those statistics are skewed. Fresh marriages are more likely to succeed; the doomed ones are like ours: complicated, messy slogging.

In Garrison Keillor’s short story, “We are still married,” a wife trumpets mundane details of life with her ordinary husband to a sensationalistic press. “He walks around humming the same tune over and over…he taps his foot in his sleep.” For months, she slanders him bizarrely in magazines and on TV. Finally, quietly, she returns home in the spring.

This is marriage: every detail grotesque and irksome, but ultimately, not unforgivable. Pessimism, or optimism? “We are still married.”

But eight! On Chanukah, the menorah burned eight days; we wait eight days to circumcise a boy. If seven represents reality, eight transcends. It is the miracles that have brought us to our eighth year, and will guide us beyond.

May we be granted the serenity to pause, if only for a nice, quiet supper together, and forgive each other our forgivable sins… before plunging headlong back into the universe we’ve built together.

Postscript:  all four articles are now IN!!!  Yay, I’m done (for now)… and now I can enter that happy state known as “resting on laurels, waiting for paycheque.”