At Value Village today (family outing!  Ted needed a new winter coat), Naomi spotted this magnetic whiteboard on the shelf and asked if it was a slate like Mary and Laura had for school in the Little House books.  I said it was similar; probably around the same size and concept.  It’s rare to find one in good condition at VV, so I said we could buy it ($1.99), and she was playing with it all day.

At bedtime, I told her to get into her jammies and I’d write her a secret message.  I decided to keep it simple, and wrote “GO TO BED.”  When I handed it over, she read it and said, “don’t look.”  She erased my message and a few seconds later, with no prompting, handed me this: 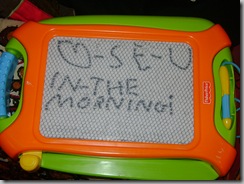 I had no idea.  My jaw almost literally dropped.  This is the kid who whines if she has to write “cat” or “Aunt Sara” without being told how to spell it.  Well, I guess not anymore.