My father’s younger brother died – last night?  Yesterday?  Five years younger, so what would that make him – 63?  I am starting to feel just a bit terrified about this gene pool I’ve inherited…
Anyway, I sent an email to his son, my cousin (I’ve changed it a bit so it’s not confusing here) [comments in square brackets were not in the email]:
Some of the last pictures I have of my father have Uncle Albert in them, from when he came to Toronto in November two years ago.
[The occasion of his visit was to see my father for the last time.  Two months after he he got cancer and was given a year to live, my father was already not doing very well; in and out of the hospital with various complications.] 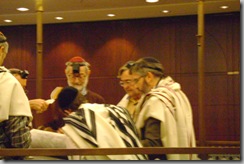 My father was never terribly into religion, but when Uncle Albert came in, he couldn't stop obsessing about bringing him to our shul for an aliyah and a "l'chaim" (my father loved any excuse for a drink).
[I cannot say how much I LOVE the fact that I have a photo of my father in tefillin – something I absolutely never saw growing up…!]
Uncle Albert didn't want to do it; didn't know what to do or how, but he agreed.  We all knew why he was in town; I think he would have agreed to anything my father suggested.  (my father was in the hospital at the time, but they let him out for the morning) 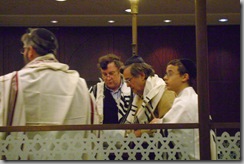 During the Torah reading, they all went up on the bimah at the front of the shul - my son (Yerachmiel Meir) read from the Torah, and my father helped Uncle Albert say the blessings.
And then afterwards, they had a "l'chaim" in the study with the other men from the shul.  The few people who stayed (it was a weekday morning, and most people go straight to work after services) were 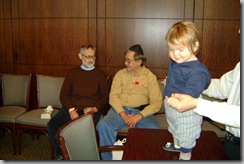 oblivious, milling around, having a good time, and I looked over at these two men and thought, "Who ARE these people?" "Why do they look so OLD???"
My dad was 65; Uncle Albert, even younger, yet they both looked like they could have been in their 70s. 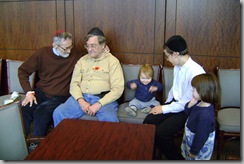 Uncle Albert started crying, and my father leaned over to hug him.  And I was so scared; I did not want that moment to be happening, but there was nothing I could do to stop it.
Yerachmiel Meir would like to say Kaddish.  He's at shul every day anyway, and all it involves is standing up and joining other mourners in a special prayer that doesn't mention death at all.  Normally, the oldest son does it.  My father would have done it in a second for his brother.

My mother just called and said she might be flying out there tomorrow, and Aunt Dorothy.  Good.
This is a terrible loss; I hope his family finds comfort.