The Yeshiva on… AUTO DRIVING

I suspect these are sentiments I’d agree with 100%, if I could read and understand them (actually, I do, for a change).  No, there was no translation provided for those who are less skilled in Hebrew/Yeshivish than I am.  It’s hard to imagine such a person, I know, but I really think there’s no chillul Hashem in making known the fact that most of the city’s gedolim believe that yeshiva bochrim under 18 (or any teenagers, particularly boys) are not  the most responsible people behind the wheel of a car. 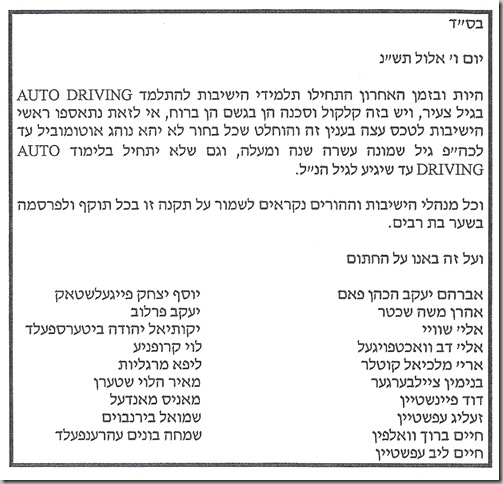 I’m mostly posting this because I think the all-caps and lack of translation for AUTO DRIVING (except where it’s referred to once in the text as “noheg otomobil”) is silly.  Or maybe the whole thing is silly.

But I have always told ALL my kids they are not driving until they can afford a car plus insurance.  Eighteen is not a special beacon of maturity, or at least, that’s what I understand from those who have had 18-year-olds.  Let them wait ‘till they really want or need to drive – and have the money to back it up.  I have learned from my parents’ negative experience with young drivers (ie, two of us with drivers’ licenses, two totalled cars).