I promised in the first part that I would post pics of the three hanging things I had forgotten.  And then, today, Gayla Trail of You Grow Girl had a post all about growing sweet potatoes!  She mentions that the leaves are edible, something that’s well-known in Africa and not-at-all-known here.  So even if we don’t have a long enough season to get actual tubers, at the end of the season we can eat the plant rather than throwing it away! 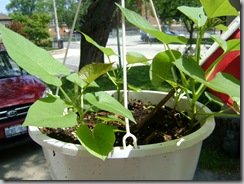 So here’s my own homegrown sweet potato, finally growing vigourously.  Lovely foliage!  But, inspired by Gayla, I really, really want to try them in grow bags next year!

Click here to see this potato when it first started growing roots, back in May.  It was very slow to start this year – after many many weeks of almost no progress – perhaps because the house was so cold.  I separated off about three slips and planted them separately in a hanging planter.  For more info on starting sweet potatoes, have a look here and here.

Here are two other hanging friends I neglected to photograph in yesterday's post.

Grocery bag tomato.  No idea what variety this is, but it’s the same bag I used last year and as you can see, much the worse for wear.  Lots of holes and tatters that I wish I’d seen before I had the tomato in and filled it with soil.  Once again, I have a rectangular basin in the top with a wick to transport water to the soil, so this is a bit of a self-watering (is it still called sub-irrigated if the irrigation comes from above???) setup as well. And finally, my “bulletproof” drought-and-flood-resistant side-door planters – first assembled in June of 2009, and back this year for yet another appearance.  At the end of last season, I pulled the soil out and stuck them in holes in the backyard, where the plants overwintered nicely. 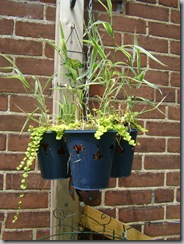 In what way are they bulletproof?  Basically, I put pretty WEEDS that I already had (from a swap and Craigslist freebie) into POTS that I liked… and hung them up.  Cheap, easy, done!

Phalaris arundinacea (“ribbon grass”) and Lysimachia nummularia aurea (“golden creeping Jenny”) are both plants that will invade and spread and can survive both periods of drought and periods of dryness, making them good for these impractically-sized tiny pots that only get watered when I remember (ie, never – I have 6 mouths to feed here!).

I think they look quite nice together, and more importantly, they SURVIVE!