This planter makes me SO happy!!! 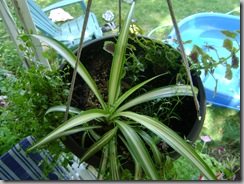 I potted it up back in May when I did the petunias, and believe me, it didn’t look like much back then.  This was basically a “leftovers” pot:  two spare lobelia plugs I’d grown from seed, a neglected indoor spider plant, and a sprig of coleus that I found snapped off a hanging planter at a Home Depot store (I didn’t do anything special, just stuck it in the soil and kept it watered).

It might not look like one of those huge, overflowing-with-blooms planters you buy at a garden store, but all the plants inside mean something to me, and they’re all healthy and doing great.  What more could I ask for?

Oh.  I just realized I lied.  Because this planter was VERY cheap – almost so cheap as to be free.  Two lobelia seeds?  A billionth of a penny.  A spider plant we got free at the Ex many years ago.  And a coleus sprig that would have been swept up and trashed in a big-box store.

But I lied because it was fast only in that it took only seconds to put it together.  I did that back in May.  It’s now mid-July and it’s only starting to look halfway-decent.  So, two months… which, in today’s instant-gratification gardening terms is practically an eternity.  Which, in Toronto, is about half the nice-weather gardening season that we get.

So, okay, cheap and EASY.  But definitely not fast.

I also realized I haven’t followed up on my various petunia-related kvetches to say they are flowering like crazy and I’m loving every minute of them.

These are the Laura Bush petunias I dreamed of in January and started back in February.  The colour is not nearly as purple as it looked in the photos, but still; they are great performers, as homegrown flowers grow.

You can see them in their infancy here and click the links back from there to watch me start them from their teeny-tiny seeds.  Here they are from the front lawn.  I am trying to be vigilant about cutting back about 1/3 of them every week or two so that they won’t get too gangly-tall and will keep blooming right through the season. 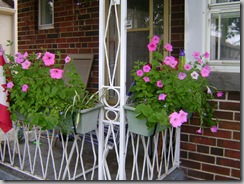 Here’s the view from above, so you can contrast it with what the planters looked like when I first potted them up.  The spider plants still aren’t showing very well; the first rains of the season usually knock them back almost to the soil, and I don’t mind because they usually bounce right back.  But hopefully they’ll get a bit more growing in before I have to bring them in for the winter. 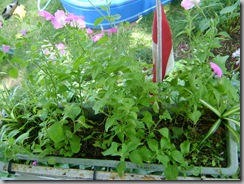