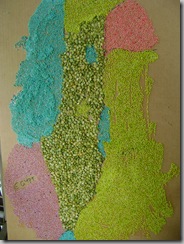 Inspired by the Israel Map Mosaic project at Challah Crumbs, we are taking the lesson of the meraglim to heart by crafting our love of Israel - in all its split-pea glory!

This project appealed to me on SO many levels. Easy enough for Naomi Rivka to do mostly on her own, fun (I adore painting on glue and tossing things to stick on top!), NOT craft-foam based, and most important of all… BIG. As big as you like, really. Big projects definitely command attention and frankly, Israel needs all the (loving) attention it can get this week. 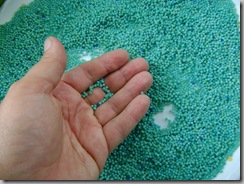 You have to prepare a bit by dyeing pasta ahead of time… I asked Ted to buy the smallest pasta kind he could find and he brought home these amazing little “beads”. I forget what they’re called, but they’re absolutely perfect.

However, it turns out that in addition to REGULAR food colouring, they now have NEON food colouring. Sheesh… what will they think of next? Ted thought NEON would be more appropriate – more fun, more bright. To his credit, he had no idea what I planned to do with it. That’s why we don’t have any primary colours represented here… just weird lurid bright-pastel shades.

The instructions for colouring the pasta are at the map mosaic project page, but basically, you toss the pasta in a baggie, add a few drops of (NEON) food colouring and a bit of rubbing alcohol. Seal the baggie, toss it all around, leave 15 minutes, then spread colours on individual plates to dry overnight.

You also need a GREAT BIG map of Israel. I happened to find a GREAT BIG piece of cardboard, and I was looking for a printable outline map of Israel when I realized I really ought to be able to just DRAW the thing. So I did, for the first time ever, based roughly on this map:

I’ve said many times before (I think), I love a craft project that is entirely biodegradable. This one definitely qualifies. Except maybe for the glue, you could probably just dump the whole thing into the backyard composter when you’re finished admiring it.

Here’s we are in progress! She started out gluing carefully around the country names; you can see where she’s left the word “Egypt” visible in the middle of the NEON purple. But she didn’t keep it up, so you can’t see where I wrote Lebanon, Jordan or Israel. I forgot to write Syria, but we did talk about all the country names as we painted them with glue. 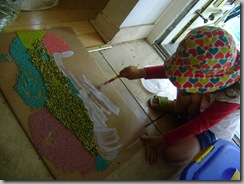 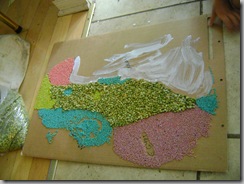 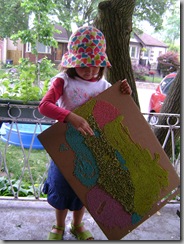 I had the concept – not in the original plan – of marking Yerushalayim; here’s Naomi pointing it out.

I drew a star and we filled it in 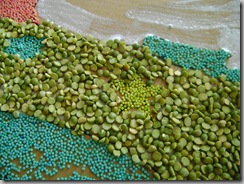 with neon green (Naomi called it yellow), but in the end it doesn’t stand out well surrounded by the green split peas. And then she ended up making Jordan the same neon-green colour, so it actually looks like a little patch of Jordanian territory in the heart of Israel.

I love how many concepts are encapsulated in this project: map colouring, parsha, basic country shape, bodies of water, neighbouring countries. Plus the multiple textures (both kids love running their fingers through the split peas), though I could have done more with this, perhaps colouring some barley or rice to fill in the other countries. Still and all – a success.