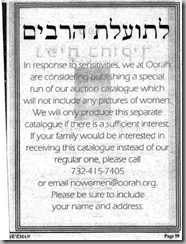 I have been frum for SO long and had no idea that photos of women were so very, very controversial.  Clueless, that’s what I am!

A few months ago, we all found it amusing that there was a notice, similar to that on the left, in Oorah’s auction brochure indicating that if any family wished to receive a separate auction catalog with no photos of women (or girls, presumably), they should call or email.  I didn’t save that notice:  this is a similar one that appeared a couple of years ago, I guess when they were testing out if there was any demand for the woman-free edition. 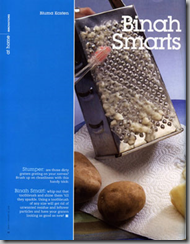 But then, a couple of weeks ago in Kosher City, I picked up a copy of Binah, a magazine for Jewish women (there’s also a kids’ supplement called Binah Bunch inside).  Why not?

Brought it home and, on Shabbos, started flipping through the articles.  Moderately interesting, kind of, in a women’s magaziney kind of way.

But after a few pages, I stopped short.  There were NO PICTURES.  Men, sure; boys, sure; flowers, great.  But I realized quickly that this must be a magazine for invisible women.

No pictures of women – in a magazine which purportedly addresses women’s issues and concerns.  I don’t know why I was so naive.

And now I’m wracking my brain to remember if I’ve ever seen a photo of a woman in Horizons, Mishpacha… or any other frum publication.  Have I?  Now I have no idea. Perhaps the most famous example is this photo of the White House kitchen, kosher-style!  Amazing, and there’s the First Lady, right in the middle, smiling and going along with the whole “Jew” thing.

Heartwarming and wonderful, except to the editors of one Jewish magazine who saw only one thing:  the lady in red.  Covered up collarbone to wrists, grinning broadly what I guess is an ervah-dik (lascivious) smile. 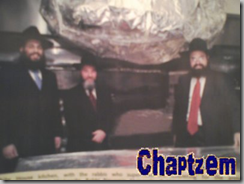 Because the publication couldn’t take it, and ultimately ran the photo looking like this instead:

(this issue is more funnily explored over here…)

It is a shame; a real shame.

Though I don’t get the Jewish Press every week like I used to (!), I still believe we should all strengthen our yiddishkeit by reading things that are uplifting, at least sometimes, and also that the kids should also see that there is at least some entertainment available that reflects our values.  Plus – shouldn’t we support whatever talented Jewish writers, photographers and whatnot that are out there.

Too bad the quality of said talent – even to my kids’ relatively uneducated eyes – is of such poor quality compared to what they get elsewhere.  I hesitate to use the words chillul Hashem, but they’re going to come away thinking Jews are morons – why not go elsewhere if this is the most fun the frum world can dish up? 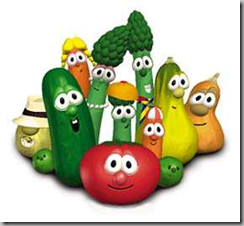 There are so many talented Jewish artists, writers and animators in the world, just to name one random example.  Surely, there are a few who could put together something as brilliant as VeggieTales, for Jewish kids?

Novels that don’t stereotype Jewish kids in the most cliché ways possible?

Or maybe, just maybe, a woman’s magazine that can realistically compete with all the shmutz that’s out there?

I used to get People Magazine from the library sometimes simply because it’s such indulgent, meaningless FLUFF that made me happy when I felt like deliberately NOT using my brain.  But at the time I was being fairly strict about what the big kids read and they realized the inconsistency right away.  “Okay,” I said, “I’ll give up People Magazine.  I won’t read it anymore.”  (I haven’t… as long as you don’t count the dentist’s waiting room)

Sometimes, just sometimes, I like a magazine, though.  Something easy, light, funny.  Something with absolutely no connection with our Real Life (“15 Clutter Busters!” “Drop-Dead Window Treatments for Under $500!” “Eighteen Ways With Ham!”).

Know which women’s magazine we read most often?  NOT that we read them, you understand!  But the only one I feel confident having around the house is Women’s Day.  Why?  I picked it up in the library (you thought I’d buy a magazine???), flipped through it, and noticed a Bible quote on the “editorial advisory board” page.

They have a different one in every issue.  Okay, some of the quotes are not technically from my Bible, but I figure it’s like the old joke… if you were on your way home, downtown, late at night, all alone, cornered in an alley, and you saw a group of rowdy teenage boys coming towards you, would you or would you not feel reassured to know they were just coming from Bible study?  Most people would.

A Bible quote – like Bible study – is no guarantee that the magazine won’t mug me, trade my cash for crack and leave me for dead, but I have to hope it says something about how decisions are made at the editorial level.

This is a niche.  I have to believe I am a niche, our family is a niche.  Literate, smart Jews who read a LOT of EVERYTHING and don’t mind looking at photos of decently-dressed (and presumably, thus, decently-living women – role models and n’shei tzidkaniyos).

We’re just not a niche that anybody is interested in serving, or even knowing about.  Invisible.

How could I not have noticed this, ever, ever before???