I created a pretty comprehensive master list of everything we eat and then I handed it to Elisheva, and told her to pick anything.

So now I have to figure out when to fit that in; tough in a money-tight week, but we’ll find a way.  Probably Wednesday, which works well because it’s also her early day home from school. 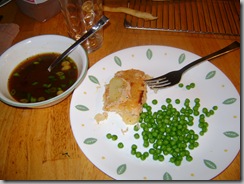 SOUP DISASTER!  Something (the strong-flavoured beer?) made the soup really bitter and after over an hour of preparing it, I had to throw the whole thing away and prepare…

Emergency miso soup:  four cups of water with chicken soup mix, boiled, turn off heat, toss in four cut-up green onions, 4 tbsp dark red miso (whisking the miso into half a cup of plain water first so it doesn’t clump).  Whisk, serve with a dot of toasted-sesame oil… delicious!  (everybody had seconds)

Shabbos:  ha ha ha ha… too far off to even speculate.