Supper and not much else 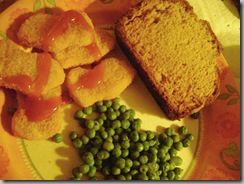 Tired tired tired.  So here’s our supper, a lazy supper which is mostly made out of Things I Discovered in the Freezer.

~ Of Tov frozen chicken nuggets… wow; it’s been a long time since we had anything like this.  Like years.  Maybe forever.  They aren’t bad, though thoroughly reconstituted-looking and chewy-tasting.  The big kids liked them, as a fish-sticks kind of thing.  The little kids didn’t seem to recognize them as chicken; they love chicken and did not love the nuggets very much, I think.

~ Frozen peas; reheated in a pot.

~ Soup made of an onion, fried, frozen veggies added and boiled with a tin of diced tomatoes which I puréed.  Oh, and I threw in a pack of chicken necks to add flavour, but they didn’t give it enough, so I still had to use chicken soup powder also.

~ Beer bread!  Slightly unsuccesful but still kind of nice.  YM made the bread, so it still counts as lazy supper.  He said, “it looks nice in the soup, take a picture of the bread in the soup.”  So here it is: 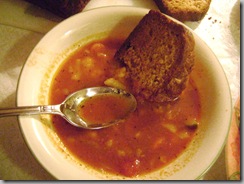