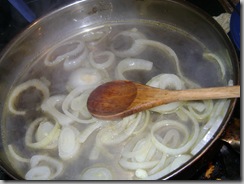 When you’re preparing onions for a recipe and want them to be super-tender and sweet with almost ZERO chance of burning, try this simmering/braising technique!  It’s slow but I think worth the effort.

These are the yummy onions I used on the Pletzl (Jewish onion flatbread) I made last week, only since onion was in the spotlight, I used a big purple onion instead of a plain bagged yellow onion like I have here.

Heat oil – canola, olive, whatever – over just-under-medium heat in your pan (not a non-stick pan, if you can help it).  Add sliced onions, sprinkle with a little salt (both to “sweat” their liquid out and to add a little flavour) and begin cooking as usual.

When onions are starting to become translucent, add a cup of water and continue “braising.”  (I don’t know if that’s what this is called – you’re simmering them in a shallow layer of water.  That’s why they’re not going to burn (as long as you don’t let the water boil away!).

Keep simmering until the water’s almost gone.  Then – gasp! – add more water.  Another cup, or whatever you have handy.  The onions should be swimming in the water.

Simmer it down again until that water is gone.

Now, look at the onions and think about how “done” you want them.  They should be starting to look a little golden; if they’re not, add more water and do the whole thing again.  If you want them more brown, you can also keep going with more water.  For pizza or bread that will be baked at high temperature, don’t make them too brown, as the oven will crisp them to death.

In any event, keep going until the last water is gone and the onions reach the colour you’re looking for.  They will be sweet and soft, with most of the sharpness mellowed right out of them.  Elisheva says they look like worms in the pan.  Tough; it is a really nice way to enjoy onions!

I made these yesterday for our Shabbos salmon.  Here’s what they looked like when they were done.  Soft, sweet:  yummy. 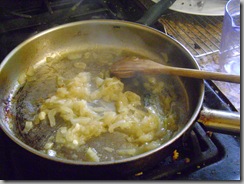