YM told me one day this spring that he’d seen the “Google Car” coming through the neighbourhood… taking pictures for Google Street View, which now seems to be available throughout North America.

And sure enough… they saw him, too!

Here he is… walking down the street towards the camera…

And now, because he’s been well-brought-up, he’s giving a GREAT BIG dorky Google-eyed wave to the array of cameras mounted on top of the car!!!  There he is!  That’s my boy! 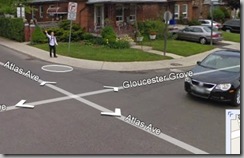 There’s only just this one shot of him.  If you scroll around to look at other views of the same street corner, he mysteriously vanishes.

And okay, I know you don’t actually Google a letter, like N.  It’s not a dictionary.  I really know that.  I will give full credit (if not an actual, tangible prize) to the first reader who cares enough to suggest a better title for this post.  So there!