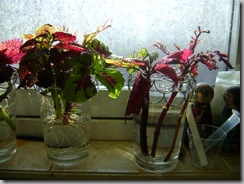 Somebody is an evil genius, I’m convinced.  They’ve come up with a coleus that rots, instead of rooting, when the stems are placed in water.   And the rot inhibits other coleus from rooting as well!

Compare the glass on left to the one on the right.  I’m too lazy to look up when I took these cuttings, so click the “Coleus” label underneath this post if you want to know how long it’s been.  A month and a bit, anyway, and the left one is rooting wonderfully well.

The right one?  Not so much.

It’s either “Colorblaze Royal Glissade” or “Henna” that’s doing it (they look the same to me).  If it’s a deliberate trait bred into the cultivar, that means it can’t be propagated inexpensively (free!) from year to year like every other coleus… which means, in turn, a trip to Humber Nursery where I bought it to replace the plant every single spring.

When I moved several cuttings that were in a glass with one of these rotting coleus to a different glass, they started growing roots just fine!  The ones that were left in with it did nothing.

And the rotting coleus themselves, despite frequent water changes and stem rinsing, have just developed a necrotic stem that oozes icky-looking clear stuff.  I trimmed off the dead and icky bits from one, but I think none of them will be salvageable.

Whoever did this is like the Monsanto of the coleus industry.  Evil genius attempting to control the plant world.  I’m not naive enough to believe plants should be FREE, but sheesh… this is definitely a first for me.