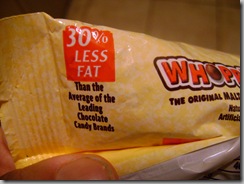 Noticed this message on the side of a pack of Whoppers last night.  Well, I thought it was hilarious and ate the whole thing… because it’s diet, right?

Massively didn’t want to go to aerobics class, especially on the subway, but it turned out the subway actually got me there early.  And then got me both up to the health-card office and down to the drivers’-license office similarly super-fast.  So much for putting down the TTC; it was lovely… relaxing, too.  I brought a book along and just read like crazy.

I should really drive less often.  I love riding subways and buses SOoo much.  I forget between times, but that is how I spent a good huge chunk of my life, and I do miss it.  The quiet, the weird kind of solitude when you’re surrounded by people who don’t care about you at all.

With kids, well, it is much less relaxing.  And there are so many variables that I don’t like to navigate with kids:  weather, delays, unexpected detours.  Cars are inefficient but generally offer the most direct route:  strap ‘em in and go.

And then, when I got home, perfection… the house to myself.  Well, almost.  Ted took the little kids down the Children’s Storefront benefit, but Elisheva came home from school sick, so she’s in the bathtub while I do laundry and play here on the computer.

Aerobics class was tough today.  I psyched myself up and DID go (the Whoppers may have been low-fat, but they were high in everything else).  I told myself I’m an adult and I didn’t have to sign up for the class in the first place… but now that I have signed up, I shouldn’t just skip classes.  But it was a hard workout, or at least, it felt that way to me.

Tuesday mornings used to be my easy workout.  The other participants were fairly geriatric (I was easily the youngest one there) and the teacher, a friendly, middle-aged Russian woman about my age, took it slowly for everybody’s benefit.  Probably didn’t want anybody ‘s heart attack, stroke or hip replacement on her conscience.

This year, we have a new teacher (Gracia, a decidely non-Asian name), and she is perky as anything… sigh.  In deference to the older participants, she’s always calling out “Option!”, like you if you want an easier workout, you can point your toe or something instead of kicking your leg; shuffle instead of leap.  But I don’t think she means me.

The last thing I want on a Tuesday morning is perky, but an energetic, young, skinny morning-person teacher is no reason to drop out of aerobics class, I suppose.