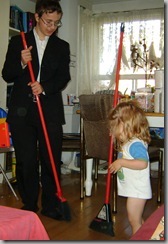 Well, YM is back at school and definitely over his brief “tzaddik” phase that he was in over break.

Friday morning, he asked me if he could stop at the library on the way home.  I said no because he came home late yesterday; that’s the rule.

So… what did he do?  Come home a couple of hours late on Friday, after stopping at the library to play his stupid game.

Arrgh.  Not much I can do, though.

He said he did it to prove to me that he could get his chores done and still have time to go to the library.  What a backwards way to go about proving that I could have faith in him.  What a BS excuse for doing whatever the heck he wants!

But he was fairly helpful once  he did get home, and what can I say – I’m a sucker for a boy with a broom.  He did a really thorough sweeping job, too, even though this was his first week setting up lights and timers and he messed up and we had to eat the Friday-night meal by a single dim bulb and the ambient glow from the kitchen.

We changed the “5-minutes-tidy” rule because, as Ted pointed out, it’s ridiculous to have big kids cleaning for only five minutes; they don’t get anything done.  So on their chart, I changed “5 minutes” with an asterisk to “task which makes a noticeable difference in the life of my family and our preparedness for the holy sabbath day.”

Plus, he was very cute and friendly with Gavriel Zev, as you can see in this picture.  GZ is Nudie Boy a lot these days, despite the encroaching cold weather, because he’s getting really good at going to the potty – despite dozens of false alarms where he’ll stand up after one second and shout out that his potty is… “empty!”

Anyway.  On the scale of Bad Things Teenagers Do, I still have to say that hanging out to play ElfQuest or whatever at the library is not waaaay up there.  As much as I’d like to freak out over every little tardiness, I can’t, especially with my lungs as weak as they are.  I have to save my air for the major infractions.